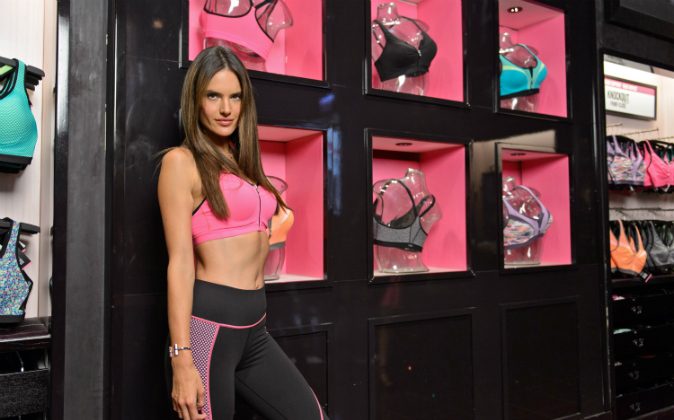 It’s hard to believe Victoria’s Secret model Alessandra Ambrosio had never exercised prior to her stint with the lingerie brand.

“In my family, no one ever worked out. It wasn’t until I did my first Victoria’s Secret show that I started exercising,” said Ambrosio in an interview with The Edit.

Ambrosio has found continued motivation with trainer, Leandro Carvalho, who keeps working out interesting and fun for her—but classes are an added bonus for the mother of two.

“What changed my attitude to fitness was finding all these classes that I really enjoyed doing. I do one called Pilates Platinum in L.A. once a week, which makes your abs and legs super-tight and toned, and I’m obsessed with the Bar Method, which I do three times a week and reminds me of the ballet classes I did for eight years as a kid.”

And if the supermodel is on the road? No worries, she has that covered.

“If I’m traveling, I’ll FaceTime my favorite yoga teacher, Louise Luz [in Florianopolis, Brazil], and sometimes do a whole 90-minute virtual class with her.”

It hasn’t always been great discipline for the model who once considered exercising her enemy.

“There were times when I would eat a whole packet of cookies. But then I taught myself not to do that, basically by reminding myself how horrible it felt the last time. Oh, and of course I would lose my job, so that was another incentive.”

Despite being a seasoned veteran in the fashion industry—where one’s body is the money maker—Ambrosio is all for having a balance in life.

“I don’t cut out any food groups. I’m all about moderation and eating something different every day,” said the Brazilian supermodel who admitted to having a glass of red wine during dinner on most nights. “Whenever I start to diet, everything goes downhill. So if I want a little bite of dark chocolate on a plane or a cocktail with friends on the weekend, I’ll have it.”

Ambrosio will also have a red velvet cupcake with her 7-year-old daughter, Anja.

Motherhood has slightly changed her attitude on lingerie wearing in public, revealing “it felt a bit weirder to be in lingerie once I was a mum.” She continued onto say: “Your body will never go back to exactly what it was before pregnancy, whatever people tell you. It can’t.”

For Ambrosio, her body is actually better post-children since she maintained a regimen before she became a mother.

“I think I have a better body now than before I had kids. It’s partly because I work out, whereas before I didn’t,” said the 34-year-old fashion icon.

There is no such thing as better, though—particularly in the Brazilian culture.

“Growing up in Brazil, it’s the curves that I remember most. Every woman’s body is spectacular there, not because it’s perfect but because they’re loving life,” stated Ambrosio in the sit down with Celia Walden.

And while taking care of the physical, the svelte stunner reminds readers “to take care of our mind and spirit, too, not just the outside.”