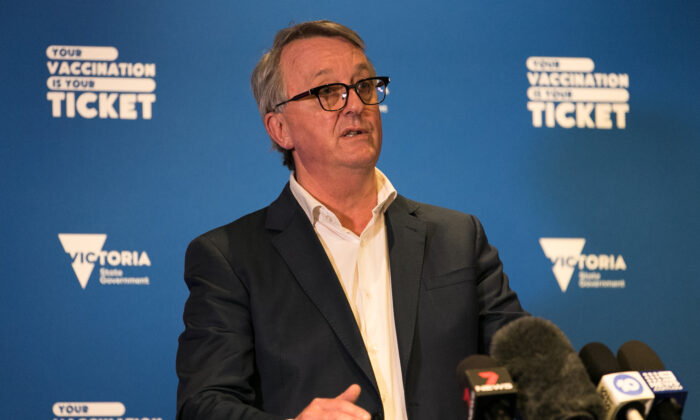 The health minister of the Australian state of Victoria has gone into a seven-day self-isolation following a family member testing positive for COVID-19.

Martin Foley said that although his rapid antigen test produced a negative result, he had to enter quarantine as a close contact, causing him to miss out on the first half of the Victorian parliament sitting week.

“I feel healthy, so I’ll continue working remotely and will be doing regular tests,” he said on Twitter on the afternoon of March 16.

This afternoon, a family member tested positive to COVID-19. I have done a rapid antigen test and had a negative result, but as a close contact I’ll be quarantining for the next seven days. I feel healthy, so I’ll continue working remotely and will be doing regular tests.

Earlier on the same day, the minister organised a press conference on vaccinations in the suburb of Sunshine in Melbourne.

The Victorian government is pushing for booster vaccination among its residents before winter arrives as the state has reported a 10 percent increase in COVID-19 case numbers week-on-week.

“We would expect to see case numbers continue to trend upwards over March and April as people spend more time indoors and mix more,” he said.

At the same time, wastewater analysis showed that the BA.2 sub-variant of the Omicron strain had spread widely through Victoria in February and now appeared in over half of the wastewater samples in the state.

“Those numbers are starting to trickle up again, and if we look at the sequencing we’re doing, we’re now seeing BA.2, the sub-lineage, in around half of our wastewater sequencing results,” Weimar said.

Victorian health authorities said that even though the BA.2 sub-variant was more infectious than the previous sub-lineage, the booster shot would still be effective against it.

“If you are up to date with your vaccination status, you shouldn’t need to worry on duty around that. All those normal COVID type behaviours will stand you in good stead,” Weimar said.

“We are now in a position where you need to ensure you’ve had your third dose protection because we’re going to see (in) colder months more people gathering and greater spread particularly on this BA.2 sub-lineage that’s now starting to increase its prevalence.”

Foley also echoed Weimar’s remark, saying that the BA.2 sub-lineage had emerged from nowhere and quickly become the dominant virus strain, but there had been no evidence that it was more virulent than other variants, reported Sky News.

Nevertheless, health experts have expressed concerns that COVID-19 vaccines may enhance the disease since they target an old version of the virus, and that taking more vaccine doses may actually lead to lower protection.

Meanwhile, the state is introducing 120 pop-up vaccination clinics in local areas that have the lowest rates of people getting booster shots.

In addition, the state government is set to close the largest vaccination hub at the Royal Exhibition Building on March 23 as there are more GPs, pharmacies and clinics providing the service.

Victoria reported that 62.9 percent of its residents aged 18 and above had received three doses of the COVID-19 vaccine so far.