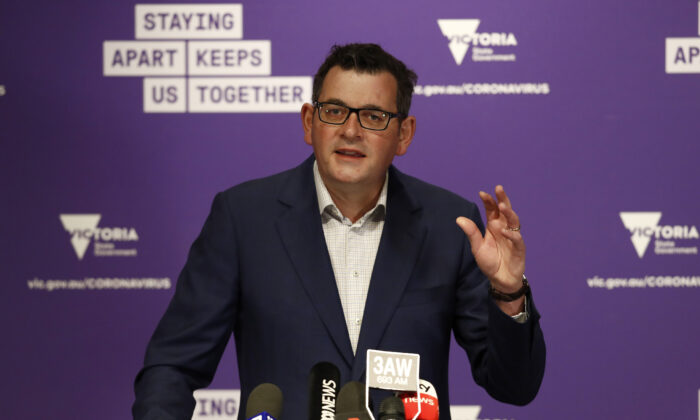 Victorians believe Daniel Andrews’ government should withdraw from the Belt and Road Initiative (BRI) agreement signed with Beijing, according to a new poll released on Sept. 2.

The poll conducted by the free-market think tank, the Institute of Public Affairs, found 54 percent of respondents either agreed or strongly agreed, that Victoria should withdraw from the BRI.

It also found 34 percent had no opinion on the matter, and just 12 percent disagreed.

The poll surveyed 1,040 individuals living in Victoria between Aug. 14 to 17 and was conducted by Dynasta.

“The Belt and Road scheme has provided the Chinese Communist Party with significant political and economic leverage over Daniel Andrews which is a threat to our freedoms and to democracy itself,” Daniel Wild, director of research at the institute said in a statement to The Epoch Times.

“The potential magnitude of Chinese Communist Party interference in Australia’s democratic institutions is a fundamental threat to the Australian way of life and must be investigated,” he added.

The poll also found that those over 55 years leaned heavily towards agreeing to withdraw from the BRI. Meanwhile, age groups between 18 to 44 leaned towards having no opinion on the matter.

The BRI has been a divisive issue for the Andrews’ Labor government, with the premier standing firm on the agreement arguing it would grow jobs for the state.

To date, Andrews has signed two Memorandums of Understanding with Beijing’s National Development and Reform Commission, once in 2018 and the other in 2019. A third agreement was due to be signed this year.

The agreements have been engulfed in a wave of controversy over concerns the BRI is a “debt-trap.”

Several developing nations have been saddled with massive debt-to-finance projects built under the initiative.

Federal Labor and Opposition Leader, Anthony Albanese has publicly opposed the BRI agreement saying, “There shouldn’t be agreements that are inconsistent with Australia’s national interests or our foreign policy.”

The bill will give the federal government the authority to review and veto agreements between foreign governments, and Australian state and local-level governments.

The prime minister has earmarked over 135 such agreements for review, a large portion having been signed with Beijing-connected entities. Subsequently, the BRI, Confucius Institutes, foreign interference at Australian universities, and all Sister-City arrangements are all expected to come under the microscope.