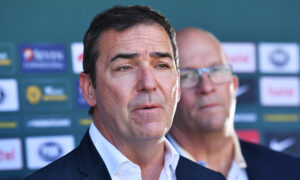 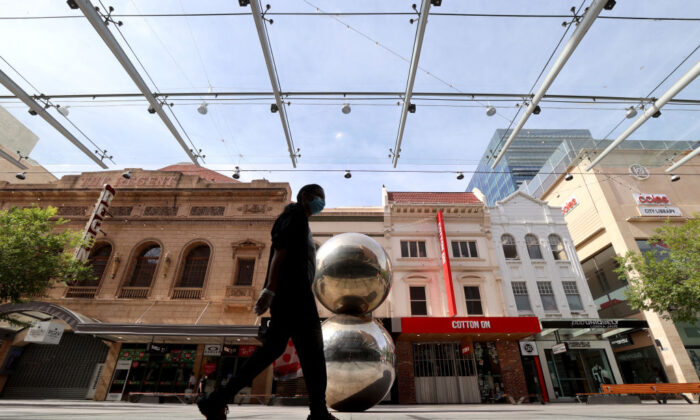 A women walks past the silver balls in Rundle Mall on November 20, 2020 in Adelaide, Australia. (Kelly Barnes/Getty Images)
Australia

Victorians Free to Enter South Australia Without Needing to Quarantine

Victorians can now enter South Australia (SA) without having to quarantine, although an online permit form is still required to get pre-approval.

The announcement comes as SA also lifts some local COVID-19 restrictions on Tuesday. The restrictions were introduced after the latest outbreak in the Adelaide suburb of Parafield which was sparked after a security guard for the hotel quarantine contracted COVID-19 from a returned traveller.  The Parafield outbreak now stands at 33 cases on Monday.

“This will be a huge relief to people as we head into December,” Premier Steven Marshall said.

Capacity limits will now also be removed for SA pubs, restaurants and hospitality venues provided that venues are using new QR checking codes—although the four-square metre rule for each person will still apply.

Police Commissioner Grant Stevens said the technology would give SA Health access to data necessary for contact tracing on a 24-hour basis, but police would not be able to access the data.

The data would also only be kept for 28 days before being discarded.

“This is our ammunition to attack any sort of outbreak so we can start contact tracing immediately,” Stevens said.

The density requirement for outdoor activities and venues where stand-up consumption is allowed will be reduced to one person to every two square metres.

Funerals, wedding and other private events would allow up to 150 patrons, while home gatherings continue to be restricted to 10 people.

Cinemas and theatres will be allowed to operate at up to 50 per cent capacity while gyms and swimming centres can also open.

The news comes on the heels of South Australian authorities issuing a public apology to the man they accused of breaching quarantine while being infectious.

It was later revealed that he was a casual contact, meaning he was considered at a lower risk of contracting the virus and not required to self-isolate.

Authorities said the man “did nothing wrong”, yet advised people who visited some certain shops to get tested.

“We are not about blaming individuals here; we are about making sure people go and get tested,” Deputy Chief Public Health Officer Emily Kirkpatrick said.

About 1300 people remain in quarantine or home isolation in the Southern Australian state.

With the scrapping the Victorian border rules, SA is now open to travellers from every state and territory as well as those from New Zealand.