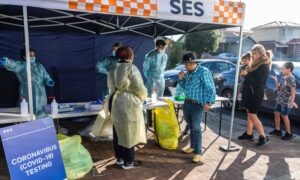 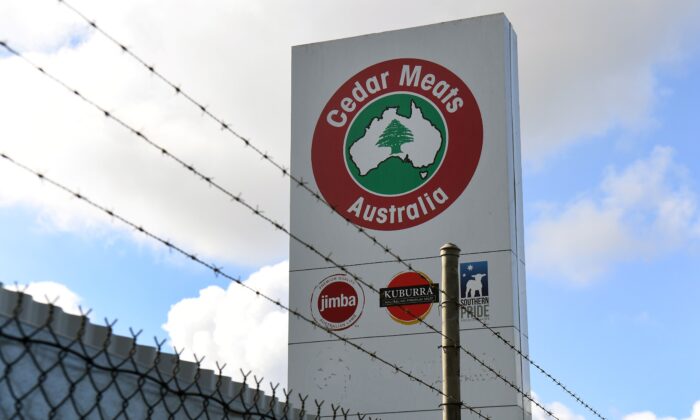 A sign outside Cedar Meats Australia abattoir in Melbourne, Australia on May 4, 2020. (WILLIAM WEST/Getty Images)
Australia

Victorian authorities are scrambling to suppress a second wave of COVID-19 as new outbreaks pop up across Melbourne.

Of 177 new COVID-19 cases reported on July 13, 151 remain under investigation, a trend that has become a constant in the last week as health authorities work hard to establish links between cases.

“I’m not going to be complacent about today’s number, it is great that it is lower than our peak, but we may not have reached our peak yet,” he told reporters.

“I would like to see a week of decreasing numbers before I say I have greater confidence about the direction we’re going in.”

More than a month after the state tackled its first major outbreak at Cedar Meats in Brooklyn, two abattoirs have closed following positive tests for workers.

An outbreak at Somerville Meats meatworks in Tottenham has grown to 12 people, a day after five workers at JBS Meats in Brooklyn tested positive for COVID-19.

Cedar Meats has given way to Al-Taqwa College as the state’s biggest single outbreak at 144 cases, besides the 242 cases already identified in public housing towers in North Melbourne and Flemington.

Sutton said the state was seeing about four to five new outbreaks daily and the virus was shining a light on social and economic inequality.

People in insecure work were more likely to go to work with symptoms of coronavirus, he said.

“There’s a number of people who have to make that very difficult choice between what is good for public health and the survival of their own family,” Sutton said.

His comments came as a staff member at the Mantra Hotel in Preston tested positive to COVID-19.

The hotel holds about 60 refugees and asylum seekers brought to Australia almost a year ago from Manus Island and Nauru under medevac legislation.

No other staff or detainees had shown symptoms or tested positive to COVID-19 and the hotel had undergone a deep clean, a Department of Home Affairs spokesperson said.

Footy star Bachar Houli on Monday announced his mother Yamama was being treated in ICU for COVID-19.

Meanwhile, outbreaks in aged care facilities have increased concern for elderly Victorians who are more likely to die from the disease.

The infection at Menarock Life residence in Essendon has spread to 26 staff and residents, becoming the largest aged-care cluster of coronavirus in Victoria to date.

An outbreak at Glendale Aged Care in Werribee has grown to 13 cases, while Japara Central Park Aged Care in Windsor has two positive cases.

Health Minister Greg Hunt on Monday announced masks would be mandatory for staff workers at aged care centres in Melbourne.

The measure follows recommendations from the Australian Health Protection Principal Committee and will involve four million masks being sent to more than 800 aged care facilities and home care providers through Melbourne and Mitchell Shire.

About 1000 Australian Defence Force personnel are heading to Victoria to help enforce the state’s lockdown and testing.