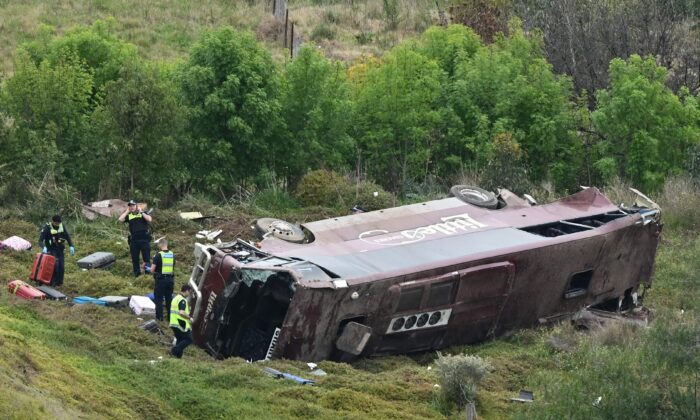 The scene of a collision between a school bus and a truck in Bacchus Marsh, Greater Melbourne, Wednesday, September 21, 2022. (AAP Image/Joel Carrett)
Australia

A college in regional Victoria will remain open in the wake of a serious bus crash involving 27 of its students to support others left traumatised by the ordeal.

Ballarat’s Loreto College will keep its doors open on Thursday despite the day of mourning for Queen Elizabeth II, so students, families and carers can come in to access counselling, principal Michelle Brodrick confirmed.

The college was plunged into shock after a school bus carrying 27 pupils in years nine to 11 crashed down an embankment after it was hit from behind by a truck in the early hours of Wednesday.

Police called their escape from the vehicle, on what was meant to be an excursion, “miraculous”.

Two teenage girls were flown to the Royal Children’s Hospital in serious but stable condition following the collision.

The truck driver was taken to hospital with serious injuries, police said, and the bus driver—aged in his 50s—sustained minor injuries in the crash.

Kangaroo Transport Industries (KTI) CEO Steve Buck said in a statement that one of their B-doubles was involved, and the 60-year-old driver was a sub-contractor “who has been safely driving road trains for more than 30 years”.

“He was trapped in the cab and was among those taken to hospital and is undergoing surgery.”

The other 25 students on the bus and four adults were taken to the hospital for observation, police said.

Speed limits at the time of the Western Highway crash at Bacchus Marsh at about 3.15 a.m. on Wednesday were reduced because of another collision the previous night.

The students were on their way to the airport at the time of the crash.

Along with the school, Premier Daniel Andrews offered up his support on Wednesday, saying the images and reports of the crash were “shocking”.

“I’ve spoken with Loreto College’s Principal, and we’ll give the school community all the support they need,” he wrote on Twitter.

Grampians Health also said on Wednesday that with many requiring ongoing support, it would continue to work with the school where appropriate.

Grampians Health’s Ballarat Base Hospital took on 16 patients from the crash – 13 of whom were discharged by Wednesday afternoon.

Melbourne-bound lanes of the Western Freeway between Ballan and Bacchus Marsh remained close on Wednesday evening.

Major collision unit detectives were investigating the exact circumstances of the crash.