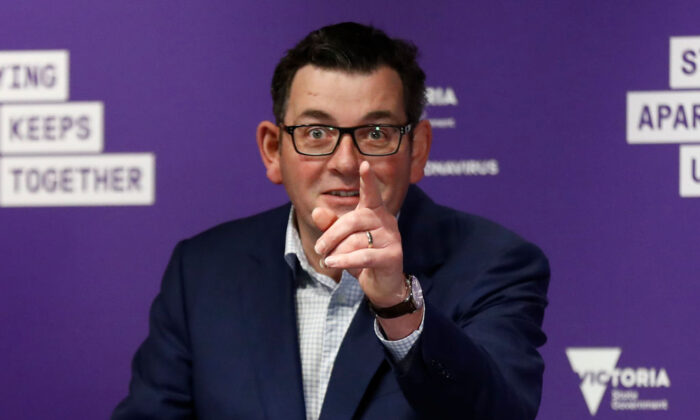 In a statement on Friday, Andrews confirmed the extension of the pandemic declaration would come into effect at 11.59 p.m. on Dec. 15, when the current state of emergency period comes to an end.

The emergency period has been in place for 640 days since it was first introduced on March 16, 2020, after which it has been extended every three months by the state’s chief health officer (CHO). But a change to the legislation now means this can be declared by the premier.

Andrews said he consulted with CHO Brett Sutton and Health Minister Martin Foley prior to making the declaration, with the former noting the widespread community transmission of COVID-19 in the state and thousands of active cases who require care.

The CHO also advised that protective measures were necessary to ensure the Victorian health system was not overwhelmed.

The pandemic powers officially became law on Dec. 7 after a mammoth 21-hour debate in the Victorian Parliament over recently added amendments.

Set to be the first of its kind, the pandemic law will strip the power to declare a pandemic from the CHO and be transferred to the premier, who will have the authority to extend it in three-month blocks.

It will also grant the Victorian government the power to create pandemic laws that can discriminate against Victorians based on personal attributes such as vaccination status, as well as social and economic factors.

“We’ve learned a lot over the past two years of this global pandemic,” the premier said on Dec. 10.

In early December, Andrews noted that the pandemic would not be “over” even after the expiration date of the state of emergency.

“In order to protect the vulnerable, in order to keep us safe and keep us open, we have to recognise this is not over, there are still things that have to be done, rules that need to be in place,” he said.

He also said vaccine mandates “won’t be forever” but flagged they may still remain in effect until booster shots were rolled out and children under 12 were vaccinated.

Shadow Attorney-General Matt Bach pointed out that there was still “no effective Parliamentary oversight” despite the introduction of a bipartisan committee to review pandemic orders.

“The Premier would still have huge power to lock Victoria down again.”

Opposition Leader Matthew Guy said on Dec. 2 he was disappointed that the bill was passed and reaffirmed his commitment to scuttle it if he wins the 2022 election.

“It is bad policy, bad laws, which are rammed through the parliament with no consultation or very limited consultation and that come at the expense of average Victorians.”

In addition, Victorian health authorities are continuing to investigate nine possible Omicron cases of the virus as the state recorded 1,290 coronavirus cases and two deaths.

There are currently three confirmed cases of the new strain in the state, all of them linked to international travel.

The premier has reiterated the state is not chasing an “Omicron zero strategy,” describing it as unachievable.

Victoria’s double-dose vaccination rate for those 12 and up sits at 91.9 percent, as the state prepares to begin rolling out Pfizer doses to five- to 11-year-olds from January 10 after final approval from Australia’s immunisation advisory body.