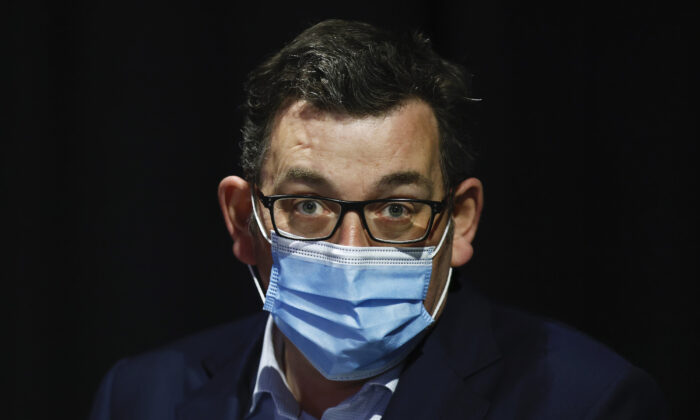 Dan Andrews, the premier of the Australian state of Victoria, is drawing up plans to give vaccinated residents more “freedoms,” while taking a “lock out” approach to those who refuse to get the COVID-19 jab, including by barring them from venues such as stadiums, cinemas, and pubs.

Andrews confirmed that discussions were taking place with industry to see how a so-called “vaccinated economy” would work, with the required technology set to be trialled in regional Victoria once it exits lockdown.

“We will have a situation where the economy is operating for the vaccinated—not everywhere and not at full capacity—but some outdoor drinking and dining, things like that, will be absolutely possible and the preference will be it may only be for those who are double-dosed vaccinated,” Andrews told reporters on Friday, the Herald Sun reported.

There has been a shift in focus from virus case numbers to vaccination numbers in Victoria this week, as authorities conceded the state cannot return to zero COVID-19 cases.

Saturday’s data confirmed that more than 2,553,000 vaccinations have been administered in Victoria.

“We are not going to be driving this down to zero. That does not mean the rules are not ongoing. In some respect, we have to try even harder,” Andrews said.

In the last 24 hours, 14,170 Victorians made an Astra Zeneca appointment.

You can go online, put your name next to one and be fully vaccinated in 6 weeks.

Do it for yourself, for your loved ones, and for all Victorians

The premier continued to push for people to take up 50,000 available AstraZeneca appointments, noting that it meant they could be fully vaccinated in six weeks, due to the revised time period between getting the second dose.

This was despite an extra four million Pfizer doses flooding into Australia this month as part of a swap deal with the UK, which Prime Minister Scott Morrison announced on Friday.

Most of the state’s restrictions will remain in place until at least 70 percent of eligible Victorians are fully vaccinated, though some reprieve will be granted when 70 percent have received their first dose.

The state was forecast to hit that initial mark on Sept. 23, but it has since been revised to September 18.

Victoria on Saturday reported 190 new COVID-19 cases as residents are given a glimpse of what life might look like once the state meets vaccination targets.

Saturday’s health department information included that 103 of the fresh virus cases are linked to other known cases.

There are 1,301 active cases in Victoria.

The latest daily case count is down from the 208 cases reported a day earlier, which was the highest number since Aug. 22.