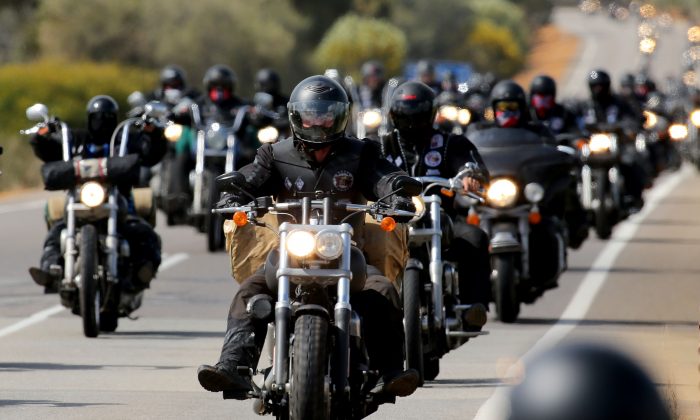 Members of the Rebels motorcycle gang ride to Perth on September 12, 2013 in Australia. Victoria, Queensland and New South Wales are cracking down on bikie gangs with new laws and a national anti-gangs squad. (Paul Kane/Getty Images)
Asia & Pacific

SYDNEY—A new Victorian strike team is the latest effort to crackdown on bikie gangs in Australia, as part of a $64 million national anti-gangs unit.

The announcement follows the passing of Queensland’s new anti-bikie laws, which aim to curtail criminal activity among bikie gangs throughout the state.

The Victorian team comprises of officers from Victoria Police, the Australian Federal Police and the Australian Taxation Office, who will be supported by additional surveillance teams, proceeds-of-crime investigators and technical specialists. The team aims to create an intelligence hub on the state’s bikie gangs.

Federal Minister for Justice Michael Keenan says the new cooperation between Australian law enforcement agencies and their state colleagues to target gang-related crime was unprecedented. The Queensland anti-gang strike team has already been established and another will soon be announced in New South Wales.

“These gangs are very often national and we know they have significant international links as well.”

Mr Keenan announced that the Victorian strike team will also work closely with officers from Customs and Border Protection to stop criminal elements from coming into Australia.

“We want to make sure that they are stopped at the border before they can come and do Australia any harm. The international links that the Australian Federal Police have, and the cooperation with Customs and Border Protection under Operation Hades, will ensure exactly that,” he said.

But opponents of the new laws in Queensland say the anti-bikie moves may threaten Australians’ civil liberties. Professor Gillian Triggs, president of the Australian Human Rights Commission, says there are concerns that internationally agreed freedoms and rights of people in Queensland may be breached under the new laws.

“Indeed, we have concerns that the very manner in which the Bills were passed—rushed through without any form of public consultation—carries with it serious human rights ramifications, as does the fact that they target people on the basis of who they associate with, rather than for something they have done,” Dr Triggs said.