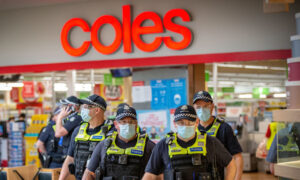 Victoria has recorded nine new cases but no deaths.

The state’s death toll from the virus remains at 806 and the national figure at 894.

The figures, confirmed by the Victorian Department of Health and Human Services on Oct. 5, bring Melbourne’s 14-day average to 11.6.

There have been 13 mystery cases in Melbourne between Sept. 19 and Oct. 2.

Melbourne needs a 14-day average of fewer than five cases as well as less than five mystery cases for restrictions to further ease on Oct. 19.

Chief Health Officer Brett Sutton on Oct. 4 said there were three new mystery cases in postcodes 3145, 3023 and 3019 and urged anyone in the areas with symptoms to get tested.

He said a single case of unknown origin might represent 10 or 15 true cases in the community.

Premier Daniel Andrews said he was “as confident as you can be” that the state’s 14-day average would drop to fewer than five daily cases in a fortnight.