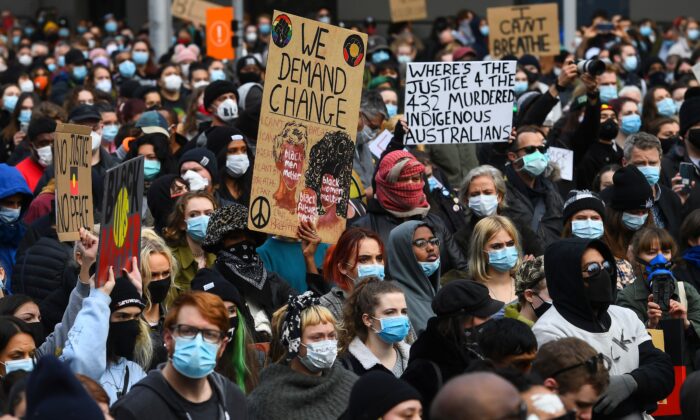 The Australian state of Victoria might be in the clear for fresh Chinese Communist Party (CCP) virus cases but concerns remain after thousands took part in a mass protest in Melbourne CBD.

Just one person with COVID-19 at Saturday’s Black Lives Matter rally could be all it took to squander the gains made, Chief Health Officer Brett Sutton had warned.

The impact won’t be known for potentially a couple of weeks.

“There might be others who have just developed symptoms … and in those circumstances hopefully they have worn a mask,” he told Melbourne radio 3AW on June 7.

Melbourne CBD was flooded with protesters in a show of solidarity for the U.S.’s Black Lives Matter movement and to call for an end to Aboriginal deaths in custody.

Victoria Police has confirmed it will fine Melbourne Black Lives Matter rally organizers $1,652 (US$1,150) each for breaching the directions of the chief health officer amid the pandemic.

Organizers “Warriors of the Aboriginal Resistance” posted online they were touched by supporters’ offers to pay their fines but preferred the money be directed to families directly affected by deaths in custody.

“We have enough networks and community to deal with this internally (if we even get a fine). Thank you VERY much for having our backs,” the social media post reads.

A smaller, socially-distanced protest of about 20 people is planned outside the Frankston police station on Sunday morning.