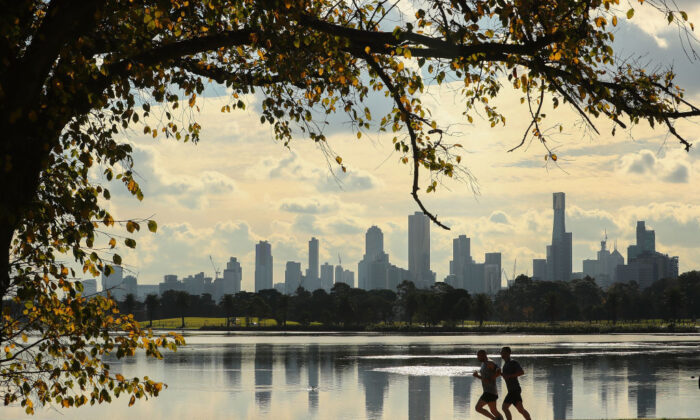 Two joggers run along Albert Park Lake on an Autumn day with high-rise and apartment buildings in the city in the background on June 16, 2017 in Melbourne, Australia. (Scott Barbour/Getty Images)
Australia

Victoria Has No Virus Deaths, One New Case

Victoria has confirmed it only had one new virus case and no new deaths.

There was a delay in firming up the daily numbers on Tuesday morning because the Department of Health and Human Resources was checking one of two new cases initially reported.

When the figures were settled, it said one of the infected persons had a Victorian address but was quarantining interstate after returning from overseas.

Melbourne’s 14-day rolling average of new cases also dropped below seven to 6.4 and the number of mystery cases in the city from Oct. 4-17 also fell by two to 13.

The latest figures come as the state government is reportedly looking at scaling back its trouble-plagued hotel quarantine program and using electronic monitoring devices for some returned travellers.

The use of such devices was being considered as one way of making sure returned travellers are isolating, The Age reported on Oct. 20.

“It seems to me the idea is a good one, as long as it saves people from something worse,” he told ABC radio.

“I don’t like the idea of electronic monitoring, but if it’s an infringement of individual liberties for the purpose of making the country safer, which is the case, then I think it’s justifiable.

“If it saves you the horror of being locked up in a hotel room for two weeks, then I think it’s justifiable as well.”

Victorian Premier Daniel Andrews has reassured Melburnians they won’t have to wait until 2021 before they can travel to regional areas.

A so-called “ring of steel” separating metropolitan Melbourne from regional Victoria remains in place despite an easing in coronavirus restrictions in the city on Sunday night.

Andrews wants that restriction and others eased before Christmas, but the premier has yet to commit to a date.

Shepparton and Kilmore have been mopping up outbreaks in recent weeks after a COVID-positive truck driver from Melbourne stopped in the regional centres.

Even as COVID-19 case numbers narrow, the premier said feedback from regional Victorians was clear.

“They don’t want a situation where that’s put at risk by people making trips into regional Victoria that aren’t absolutely necessary,” Andrews told reporters on Oct. 19.

The premier also on Monday conceded New Zealanders can enter Victoria despite the state not signing up to be a part of a trans-Tasman travel bubble negotiated by the federal government.

The Victorian Department of Health and Human Services’ website has now been updated to accommodate the new situation.

Meanwhile, people living in Melbourne can now travel 25 kilometres from home and have greater freedom when it comes to social activities and exercise.

The state’s death toll remains at 817 and the national figure is 905.