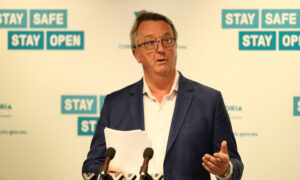 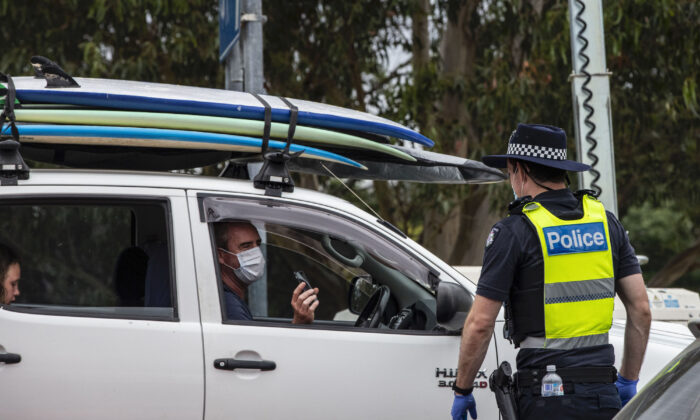 Police officer patrols and checks for entry permits to Victoria at a border checkpoint in Mallacoota, Australia on Dec. 31, 2020. (Diego Fedele/Getty Images)
Australia

More than 1500 Victorians have applied for exemptions to the state’s border closure with NSW, but so far authorities have granted just 117.

A hard border between the two states came into effect on the night of Jan. 1, requiring anyone returning after then to be approved and undergo 14 days hotel quarantine.

End of life visits and funerals are among the reasons health authorities have approved applications, which also require a negative coronavirus test to be accepted.

Applications are taking up to 48 hours to consider. Nearly half have had further documentation requested.

Victoria recorded three new community cases of the virus on Sunday, taking the total in the latest outbreak to 21 and total active cases to 32.

All the community transmission cases are tied back to the Buffalo Smile Thai restaurant at Black Rock, in bayside Melbourne.

There are 2765 close contacts of those infected who are currently in isolation, including 2406 people who were primary contacts.

The cluster, seeded from NSW’s northern beaches outbreak, prompted a swift crackdown by the state government on border rules.

More than 60,000 Victorians rushed back from NSW, all requiring testing on their return.

That’s put testing facilities under strain, forcing some sites to extend testing hours and for some staff to be recalled from holidays to meet the extra demand.

Testing capacity was boosted by almost half, taking total sites on Sunday to 190. That included opening pop up sites, additional drive through services and boosting capacity at existing locations.

Capacity is expected to increase again on Monday.

The huge volume of people getting tested saw more than 22,000 tests processed on Saturday.

Nearly four million tests have been performed in Victoria over the last 12 months.