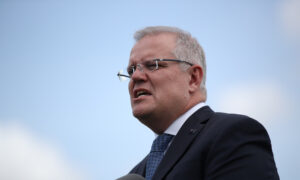 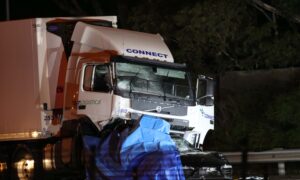 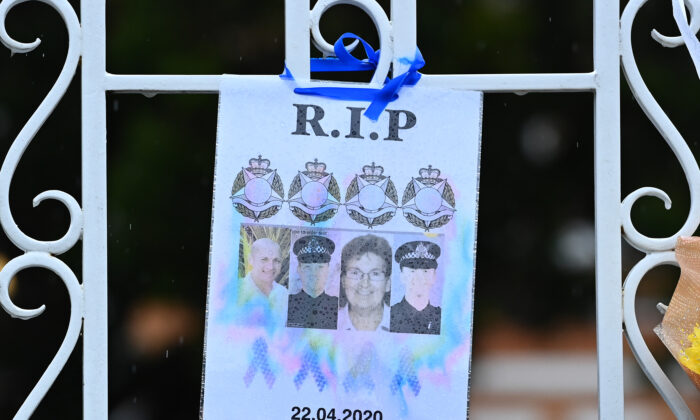 Detail of the pictures of police officers as a tribute at the front gate of the Victoria Police Academy ahead of the funeral of Constable Glen Humphris on May 01, 2020 in Melbourne, Australia. (Quinn Rooney/Getty Images)
Australia

Victoria Cops Killed on Duty to Be Farewelled

Two Victorian police officers killed in the line of duty will be farewelled at funerals on May 1.

Constable Glen Humphris and Senior Constable Kevin King will be farewelled at separate services at the Police Academy in Glen Waverley at 10am and 1pm on Friday.

The two officers were killed along with colleagues Leading Senior Constable Lynette Taylor and Constable Josh Prestney when a truck crashed into them on the Eastern Freeway on April 22.

Sen Const Taylor was farewell at the academy on Thursday.

The service was followed by a minute’s silence by Victoria Police members.

Const Humphris joined Victoria Police in 2019, shortly after moving to Melbourne with his partner of four years, Todd Robinson, who described him as “bubbly, outgoing and loving”.

At the time of the accident, he was on placement as part of his probationary constable extended training.

Sen Const King, meanwhile, had been with Victoria Police for six years, and was described by his family as “a caring, considerate, gentle and kind-hearted person”.

The 50-year-old is survived by his wife, Sharron Mackenzie and their three children William, James and Henry.

After the two officers’ funerals, their colleagues will form a guard of honour at police stations across the state.

Police Minister Lisa Neville, Deputy Commissioner Wendy Steendam and the secretary of the police union Wayne Gatt will then lay a wreath at the Airlie Conference Centre, which was once a police training college.

Const Prestney will be farewelled at Xavier College, where he graduated in 2009, on Monday.

Due to COVID-19 ­restrictions, a maximum of 10 people can attend each funeral, with the services live-streamed to family, friends and colleagues who cannot attend.

Chief Commissioner Graham Ashton will assist in officiating at each of the services.

He said a public state memorial service will be held once restrictions are lifted.