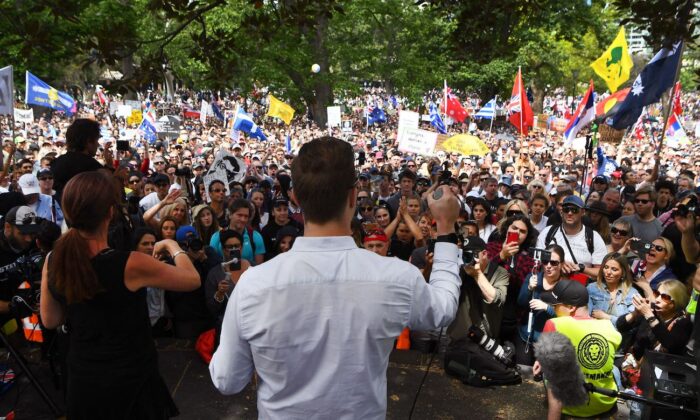 A speaker addresses a rally against Covid-19 lockdown and vaccination measures in Melbourne, Australia, on Nov. 20, 2021. (William West/AFP via Getty Images)
Australia

Victoria has recorded 1029 new COVID-19 cases and three deaths as the state approaches its 90 percent double-dosed vaccination target. The figures bring Victoria’s total number of active cases to 9533 as the state government sets to gather enough support to pass its controversial Pandemic Bill.

There are currently 316 people hospitalised due to the virus with 98 in intensive care and 23 on the ventilator. On Sunday, over 49,000 COVID-19 tests were processed and 3510 people got vaccinated at state-run vaccination hubs.

Currently, 93.5 percent of Victorians aged 12 and above have now had at least one dose of a COVID-19 vaccine and 89.3 percent are fully vaccinated.

The Victorian Premier Daniel Andrews said last week that the approaching 90 percent vaccination milestone would make Victoria “one of the most vaccinated places in the world.”

On Nov. 20, tens of thousands of protestors demonstrated on the streets of Melbourne’s metropolitan regions to protest the government’s proposed Pandemic Bill and COVID-19 vaccination policies.

The controversial Pandemic Bill is currently being delayed in the upper house after former Labor MP Adem Somyurek returned to parliament, vowing to vote against it.

Meanwhile, Australian Prime Minister Scott Morrison has maintained that he does not have sympathy for violence, but has sympathy for “Australians who have had a gutful of governments telling them what to do over the last two years.”

Morrison argued that the implementation of the restrictions was “regrettably necessary” and said while he did advocate for them, the Australian economy is now opening up due to the hard work of Australians.

Morrison expressed that he welcomes the fact that Australia is now in a position for “setting dates for when the government steps back.”

The prime minister’s statements however have been met with criticism by Victorian Premier Daniel Andrews and other members of the Labor Party who alleged the prime minister was “pandering to extremists” for the electoral votes.

This comes after the state government in Victoria has been trying to push through a Pandemic Bill which will give the Victorian premier and health minister unprecedented power; allowing the health minister to make pandemic orders specific to “classes” of people based on their age, location, vaccination status, or occupation.

The debate over the health mandates come as New South Wales (NSW) state government has said that those who have chosen to not be vaccinated will be able to enjoy equal freedoms as the those who are fully inoculated, once the 95 percent vaccination rates are reached, or by Dec. 15, whichever comes first.