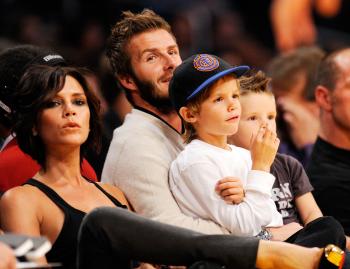 Victoria Beckham, David Beckham, and their boys watch a basketball game between the Los Angeles Lakers and the Dallas Mavericks in Los Angeles in 2009. The Beckhams are expecting their fourth child in summer 2011. (Kevork Djansezian/Getty Images)
Entertainment

By Helena Zhu
Print
Britain’s “it” couple has some exciting news to share.

Former Spice Girl Victoria Beckham is pregnant with her fourth child with husband David Beckham after having three sons, the couple announced on Twitter and Facebook.

“I've got some great news to tell you all," David, 35, posted on his Facebook page Sunday, Jan. 9., "Victoria and I are expecting our fourth child this summer. The boys are very excited about the arrival of a new brother or sister.” By 4 p.m. EST Monday, his page had drawn 32,203 “likes” and 6,772 comments.

The couple flew back to their $28 million mansion in rural Hertfordshire, England, on Jan. 8 from their Beverly Hills home to tell the news to friends and family, according to Time magazine.

“@victoriabeckham Yeah!!!! Its such brilliant news!!!,” tweeted Bunton, who currently serves on the judging panel of Dancing On Ice.

“Thank [you] so much for your kind and beautiful messages!!! We are all so happy and very excited!!!!!! x vb x,” tweeted Victoria Beckham, on Jan. 10, in reply to her girlfriends.

The couple has been married for 11 years and have three sons: Brooklyn, 11, Romeo, 8, and Cruz, 5. The fashion icon is more than three months pregnant, according to The Telegraph.

The Beckhams help children through their Victoria and David Beckham Children's Charity and have raised more than $1 million for children’s causes, including donating hundreds of wheelchairs.