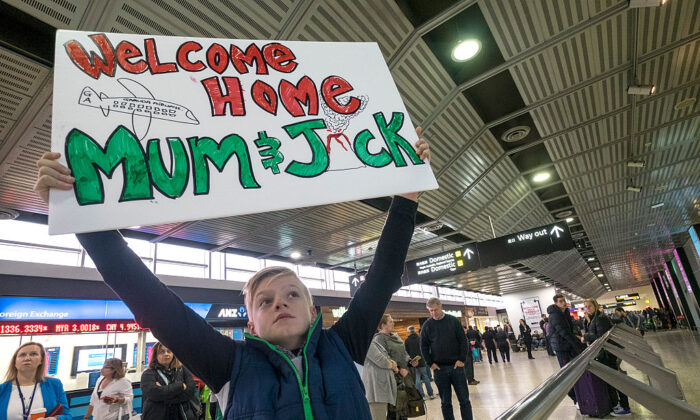 Victoria and South Australia are welcoming back Australians returning home on international flights despite a spectacular quarantine breach.

Both states have restarted hotel quarantine for the arrivals after pausing their programs to deal with localised coronavirus outbreaks.

This will increase the cap on stranded Australians returning home from overseas to 6700 people a week.

Neither state has been deterred by the case of a German-Australian mother and son skipping hotel quarantine in Sydney and flying straight onto Melbourne.

But Trade and Tourism Minister Simon Birmingham is disappointed by the weekend breach.

“It is a reminder the relentless task of bringing thousands of returning Australians home each and every week, as we continue to do, working with the states and territories, is a real challenge,” he told the ABC on Dec. 7.

“It is the greatest area of potential vulnerability in terms of COVID spreading into the community.

“And it’s why there needs to be continuous work to make sure that all of the systems and checks and balances are in place to be able to do that safely.”

NSW Police have taken the blame for the breach.

Meanwhile, Tasmania has joined the national quarantine effort as a repatriation flight from India landed in Hobart.

More than 120 passengers, including about 30 children, have now entered mandatory quarantine for a fortnight.

It’s the first of three flights scheduled to deliver Australians returning from overseas to the island state to serve their quarantine.

Meanwhile, federal Health Minister Greg Hunt is keeping an eye on a vaccine rollout in the United Kingdom as he prepares to make a decision on Australia’s rollout by the end of January.

Pharmaceutical giant Pfizer’s vaccine, which the UK is rolling out this week, is among several expected to be available by March.

“We very specifically built in place a range of vaccines and all the different data, whether it’s from the clinical trials or what’s going to occur in the United Kingdom, will be of immense value to Australia,” Hunt said.

By Daniel McCulloch in Canberra