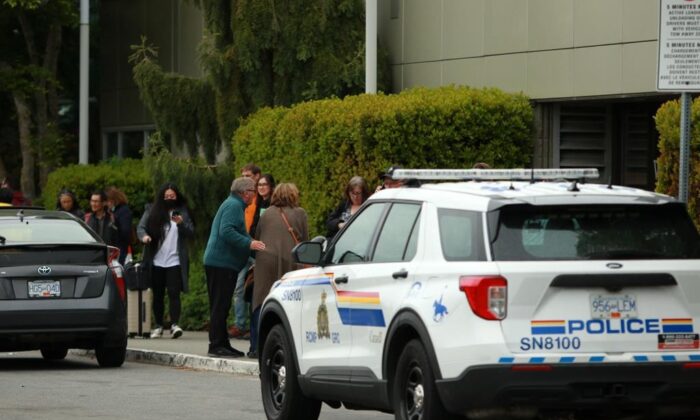 RCMP respond to a call for service issued from the airport causing all commercial flights to be suspended as RCMP continue to investigate the ongoing incident at the Victoria International Airport in Sidney, B.C., on May 24, 2022. (The Canadian Press/Chad Hipolito)
Canada

NORTH SAANICH, B.C.—All commercial flights at Victoria’s International Airport were cancelled Tuesday after the discovery of something that looked like “an incendiary device” in someone’s luggage, RCMP said.

Cpl. Andres Sanchez said the suspicious package was identified in the departures check−in area of the airport around 1:30 p.m. during a security scan.

It was seized by Canadian Air Transport Security Authority staff, police were called and a wing of the airport was closed to ensure travellers were safe, he said.

Specialized units from the Lower Mainland were called to inspect the item and Sanchez said the airport would be closed for several hours out of an abundance of caution.

The individual carrying the luggage was under investigation but police needed to determine the nature of the item before proceeding with any possible charges, Sanchez said.

Sanchez said police did not believe there was any threat to the public, however members of the public were still being asked to avoid the area on Tuesday evening.

“At this point, we’re trying to determine if any criminal charges are applicable in this instance, again, because we don’t know specifically what is in that bag,” Sanchez said.

The Victoria International Airport said it closed to commercial flights as the RCMP responded to a call for service.

A statement posted on the airport’s website Tuesday afternoon asked travellers not to go there.

It said the airport authority could not comment further, and that it would provide more information as soon as possible.

An update posted to the airport’s Facebook page just after 4:30 p.m. said airlines were working with their operations teams to determine the status of flights, and those scheduled over the next two to three hours were cancelled.

A statement from WestJet said six flights had been cancelled as a result of the temporary closure.

“All guests impacted by the listed cancellations have been proactively notified and re−accommodated,” it said.

Around 6:45 p.m., the airport’s website showed five Air Canada flights between 3:30 and 8:20 p.m. had been cancelled. An Air Canada flight to Calgary scheduled to leave Victoria at 6:20 a.m. Wednesday was also listed as cancelled.