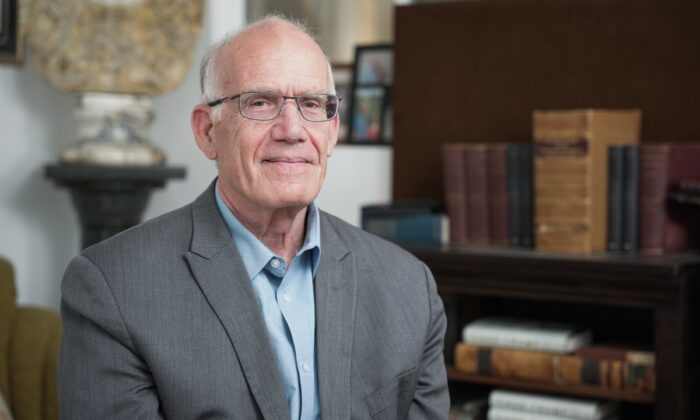 Victor Davis Hanson on Mar-a-Lago Raid, the FBI, and the Corruption of Our Political Processes

“We’re in a revolutionary cycle,” says Victor Davis Hanson, “where the left has declared that Donald Trump is so threatening to the Republic that it requires any means necessary to end him.”

In this recent episode of American Thought Leaders, host Jan Jekielek and Victor Davis Hanson, classicist, political commentator, and prolific military historian, discuss the raid on Mar-a-Lago, the FBI, and the corruption of our political processes. Hanson’s most recent book is “The Dying Citizen.”

Jan Jekielek: On August 8th, the FBI sent some 30 officers to Mar-a-Lago, who spent 10 hours there. It’s described as a raid. What was your reaction as this news hit?

Victor Davis Hanson: There have been lots of disagreements about archives. George W. Bush even nullified the archival law with an executive order to not comply with it for a while. Barack Obama didn’t hand over what was requested and resisted Freedom of Information requests. This wasn’t new. They all do it, and you can see why. You have a note somebody writes you. Is that yours or the State’s? So, I thought this raid was crazy.

It’s also part of a series of incidents against Trump and his associates. The FBI’s wants a lurid diary belonging to Joe Biden’s daughter and so drags James O’Keefe outside his home in his underwear. They send a SWAT team to arrest Roger Stone at home. They arrest and handcuff Peter Navarro. They mess up Rudy Giuliani’s office. The FBI and the DOJ are out of control, and they’re sending all of us a message: “We can do this, and nobody’s going to stop us.”

We’re in a revolutionary cycle where the left has declared that Donald Trump is so threatening to the Republic that it requires any means necessary to end him. They first tried institutional means. Let’s get rid of the filibuster. Let’s pack the court. Let’s bring in two more states. Let’s get rid of the Electoral College. None of that’s worked yet.

Now they’re acting extra-legally. That’s what happened in the Roman Republic and at the end of Athenian democracy. That’s what the Democrats have started.

Mr. Jekielek: You laid out how this event is connected with other events. Let’s focus on January 6th and the January 6th Committee. Is there a direct relationship between these two events?

Mr. Hanson: I think there is. Because we do this all the time in America, we know how such a committee should operate. Speaker Pelosi and Minority Leader McCarthy meet, and depending on the committee’s size, say, “Well, here’s our seven Democrats. Here’s our six Republicans.” They get a team of lawyers, and they adduce evidence. They bring in witnesses. Usually the majority party presents them, and the minority party tries to tear them apart, and then they switch roles. Then they go public and argue in front of each other. Out of this, they distill the truth. At least that’s the pretense.

The January 6th Committee doesn’t bear any resemblance to this. There are no real Republicans on the committee. The votes are all unanimous. The witnesses are essentially told, “This is what we want to hear even if it’s exactly opposite of what you’ve tweeted or posted on social media. Are you going to do it? Or do we have to cite you for contempt or make a criminal referral that would cost you a lot of money?” These witnesses then flip or contradict each other. There’s no cross examination. There’s no special counsel. There’s none of this. That’s the first problem with this revolutionary committee.

Michael Rosenberg is a Pulitzer prize-winning New York Times reporter. He says he knows more about January 6th than anybody. He was caught on tape telling James O’Keefe that FBI informants were everywhere that day, and it was a joke. It was not a systematic insurrection. Are we going to bring interview him? Who said that Officer Sicknick was murdered? They knew that was false. He died of natural causes. Since when do you shoot an unarmed female military veteran weighing 105 pounds for breaking a window and going into the Capitol? Who covered that up? We have all these questions, and no answers.

And the left likes it. “Wow, we’re finally getting down to business. These guys are scared of us. We can SWAT team them. We can bankrupt them. We can even get into Mar-a-Lago and Melania’s closet. This is great.” That’s where they are right now.

Mr. Jekielek: I’m reminded that part of the woke agenda is the destruction of Western civilization. So that would seem to be on point if that’s indeed the case, wouldn’t it?

Mr. Hanson: It’s the manifestation of globalization and enormous wealth that we’ve never imagined. A staggering amount of wealth has gravitated to the left, and people like Jeff Bezos and Mark Zuckerberg are exempt from any worry about shelter or food. They’ve got Gulfstreams, limos, and mansions, and money they couldn’t possibly spend it in a million years. So they’re pouring it into critical race theory, BLM, and climate change.

They live in homes whose square footage is at odds with their climate change bromides. They fly on private jets, which you’re not supposed to do because of their huge footprint. They hate charter schools and school choice, but almost all their children are in academies. In other words, their lives are completely antithetical to the egalitarian rhetoric they live by.

Mr. Jekielek: A lot of people say that this raid on Mar-a-Lago is crossing the Rubicon. It’s something we’ve never seen before, not just actually, but also symbolically. How do you see that?

Mr. Hanson: 45 men have served as presidents. How many had their private residences raided after leaving office? Zero until now. So why Donald Trump?

The answer is he’s never held political office. He didn’t play by the Marquess of Queensberry Rule. He gave it back in kind. His vocabulary and mannerisms were considered unpresidential. He was popular with a demographic that the elites consider uneducated, retrograde, racist, xenophobic, you name it, irredeemable.

Mr. Jekielek: One of our commentators, Marc Ruskin, was a 27-year FBI veteran and a former federal prosecutor. This is how he describes the Mar-a-Lago FBI raid, “The disregard for traditional norms and apparent lack of concern with the appearance of impropriety is indicative of an abandonment of even a veneer of independence and objectivity.” What does this say about the FBI?

Mr. Hanson: A toxic hierarchy of careerists run the FBI. They rotate in and out, and then go into private enterprise. They condition their ideology to fit their career trajectory. They get great jobs and want to be loved by the media. But some say they don’t represent the rank and file.

My problem with that position is: Who were the people in Michigan that were hiring FBI informants to egg on a bunch of nuts to kidnap the governor? Who was Peter Strzok? Who was Lisa Page? Who was Kevin Clinesmith? He was a lowly lawyer who felt he could doctor with impunity a federal FISA application. So I don’t believe it’s just the hierarchy. I believe the values of the hierarchy have permeated the FBI. There are wonderful people in the agency, but they understand they won’t be promoted or recognized unless they toe a particular line.

So why not break it up? We could take all those from the FBI who specialize in terrorism, and give them to Homeland Security. Some FBI people go after counterfeiting or currency violations. Give them to the Department of Treasury. A lot of them work with the Pentagon, so put them with the Pentagon. Disperse them throughout the federal government.

The left says democracy dies in dark. Right now, the FBI is one of the great threats to democracy. It’s a terrible thing to say, but think about it. Do they intervene in elections? Yes. They hired a foreign national spy who was basically being paid by Hillary Clinton, GPS, and DNC paywalls. They tried to spread a dossier. They ruined Carter Page. They went after Papadopoulos. They tried to destroy Michael Flynn.

And their leaders lied. Andrew McCabe lied to federal investigators. James Comey pled amnesia. They tried to affect the election in 2016 and the one in 2020. They had Hunter Biden’s laptop and said, “We’re not going to talk about it.” Now that the narrative has changed and Joe Biden has become a liability, we’ve started to get leaks about that, and those might come from the FBI.

When you have a rogue agency interfering at the highest levels to affect an election, and the agency directors are willing to alter documents or lie under oath, and they’ll prosecute one person but not another, then it’s institutionalized, and you’ve got to get rid of it.