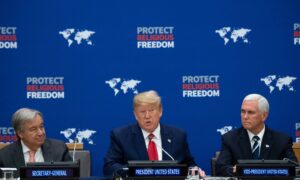 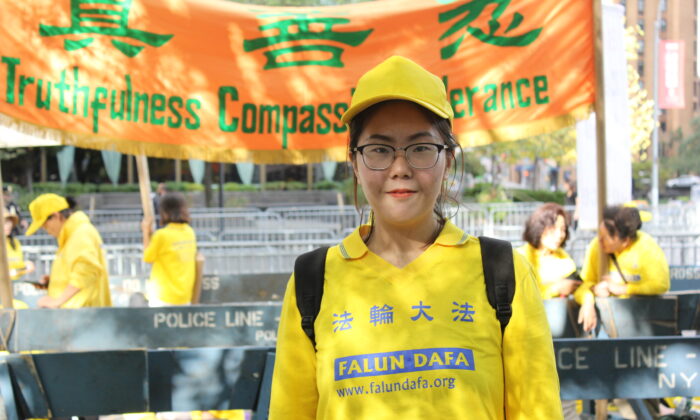 For the past 20 years, the Chinese regime has persecuted adherents of the spiritual practice Falun Gong, in an unrelenting campaign involving arbitrary arrests, detentions, brainwashing, torture, and death.

Falun Gong, also known as Falun Dafa, is a meditation practice that includes a set of moral teachings based on truthfulness, compassion, and tolerance. Its immense popularity, drawing an estimated 100 million adherents by the end of the 1990s, was perceived by the communist regime as a threat to its authority. In July 1999, it launched a sweeping campaign to eradicate the practice.

Practitioners of the faith group, young and old, told their stories at the U.N. Plaza of how the persecution forever changed their lives.

A Trip Back to China

Dou Jinmei, 57, was living in New Zealand when news of the persecution reached her in 1999. For two days, she listened to how China’s state media broadcast hate propaganda vilifying the practice. She felt something was wrong, as she has personally experienced the positive health benefits of practicing Falun Gong exercises.

“They are smearing the practice,” she said.

Hoping to tell the Chinese government the truth about the practice, Dou and around 20 other New Zealand practitioners flew to Beijing in December 1999, and headed straight to Beijing’s petition office the night they arrived.

As soon as the front desk receptionist learned that they were Falun Gong practitioners, he directed them to the backyard of the building, and ushered them onto a bus.

“We looked around and realized that a lot of practitioners were already there, perhaps dozens of them,” Dou said. The bus brought them to the Qianmen Detention Center in Beijing, where they were told to take off all their clothes in front of male prisoners to check for “offensive weapons.”

Dou remembered a group of guards surrounded a female practitioner from the region of Xinjiang and hit her hard when she questioned why they had to do so.

Some were then confined at the Qianmen facility, while others were brought to other detention centers. Detainees were only allowed two restroom breaks per day. “If you urinated or defecated in your pants and they caught it, they will definitely beat you up,” she said.

Dou said that during the first night, she lay on a brick bed with all other cellmates right next to each other, “stacked on top of each other,” she said. Her mind was restless.

“We are just regular citizens … what, if anything, could be wrong with practicing Falun Gong? Why would [authorities] lock us up here and treat us like this?”

Dou went on a hunger strike, along with several other practitioners, to protest the inhuman treatment. As punishment, the guards tortured her by force-feeding liquid through a tube that was inserted into her nose and reached into her stomach. “They said it was milk … when it was poured into the stomach you knew—it was salty water.”

“It burns your stomach, and it felt like my lungs were about to explode,” she said. “When your lips dried, there’s a layer of salt.”

Dou was detained for a month, during which guards persisted in trying to get her to renounce her faith.

“If you want to die, I will let you die this moment,” Dou recalled a guard saying. “If we beat you to death, it will be as good as you committing suicide,” the guard said.

After another grueling term at another detention center in her hometown, Dou eventually escaped back to New Zealand in May of 2000, with the help of a Chinese official who took pity on her.

“The [Chinese regime] has been persecuting us for 20 years, the world leaders should be clear by now and stand up to stop it,” Dou said.

Jiang Yinghuan was roughly three years old when her mother left the house in 2000 in order to escape the police who were looking for her.

Jiang recalled police officers asking her father where her mother had gone, and after getting a vague answer, turned to her. “The police had a fierce look on his face, and it terrified me,” she said.

But her mother could not bear being separated from her. In 2001, her mother eventually returned to see the family. She was immediately arrested by police who were waiting at the door.

Jiang said that her mother spent roughly half a year at a detention center in their hometown of Harbin, the capital of Heilongjiang.

Because of her mother’s situation, kids bullied Jiang at kindergarten and made nursery rhymes to taunt her. Her school teachers treated her coldly.

“It cast a shadow on my mind, and I dared not tell anyone that my mom is a [Falun Gong] practitioner, because she could go to jail again for it. And I got traumatized by my playmates’ bullying,” she said.

Jiang said that every year, her primary school would hold class sessions where teachers would teach students the Party’s propaganda about Falun Gong, which vilified the practice as a dangerous cult. “When the teacher was saying bad things about Falun Gong on stage, my classmates would also join in,” she said. “It really tormented my heart, I was shouting inside that Falun Gong is not like this, it’s the Chinese Communist Party persecuting us and blackening us.”

Because of the fear and the pressure, Jiang said she didn’t invite any friends to their home.

She said that when Beijing hosted the 2008 Olympics, local authorities also stepped up their persecution.

“Every time my mom went to pick me up from school or every time we went out, we always had to look around to make sure no one was following us,” she said. “Every evening when I heard someone walking up the [apartment building] stairs, I would panic. The louder the footsteps the more panicky I became.”

Jane Dai, whose husband was persecuted to death in China, said she hopes her daughter can lead a “normal life” now in the United States.

Dai’s husband was imprisoned, tortured, and died in 2001. The last time her daughter, now 19, saw her father’s face, was when she was nine months old.

“She said that she was very curious how it feels like to have a father,” Dai said.

Dai said that she only fully realized how her daughter lacked a normal childhood when she observed one day a boy chasing pigeons in the park. “I never saw my daughter like that, with that kind of innocent joy.”

“Twenty years of persecution … It’s too long for one generation to endure all of this,” she added.

Jiang said that she couldn’t hold back the tears as she sat meditating at the UN Plaza.

“The practitioners in China are still suffering from persecution,” she said. “I have to do my part.”