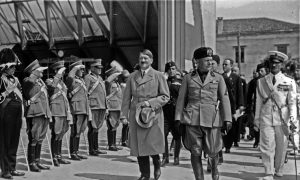 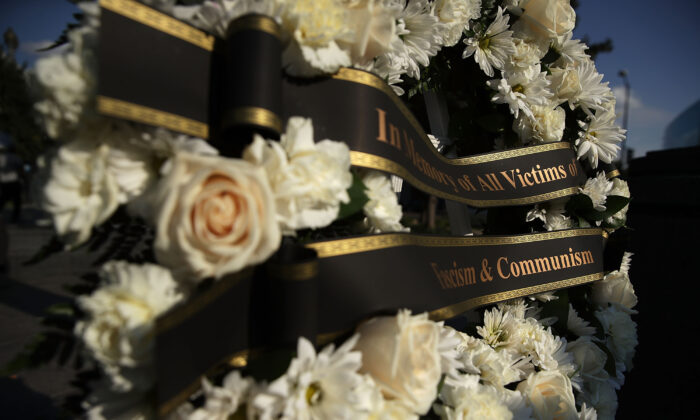 A wreath is placed during a "Black Ribbon Day" remembrance event at the Victims of Communism Memorial in Washington, DC., on Aug. 23, 2017. (Getty Images/Alex Wong)
Canada

Federal and provincial officials paid tribute to victims of the communist Soviet Union and Nazi Germany on Black Ribbon Day, the National Day of Remembrance for the Victims of Communism and Nazism in Europe.

Established through a unanimous resolution of the House of Commons in 2009, Black Ribbon Day is commemorated annually on Aug. 23, the anniversary of the 1939 signing of the Molotov-Ribbentrop Pact between Nazi Germany and the communist Soviet Union.

According to the European Observatory of Memories, the pact divided eastern European countries into German and Soviet spheres of influence and, soon after the pact was signed, Nazi Germany and the Soviet Union jointly invaded Poland, starting World War II.

As a result of the Molotov-Ribbentrop Pact, “Millions of Europeans were robbed of their basic rights, subjected to violence or murdered, and countless others were forced to flee to new lands,” said Prime Minister Justin Trudeau in a statement on the Liberal Party website.

To commemorate the victims, Trudeau said Canada will stand with the survivors who found refuge in Canada and their descendants who “made extraordinary contributions to our country and have helped build the diverse and strong Canada that we know today,” and with “all those who continue to face violence and persecution from authoritarian and totalitarian regimes.”

“We all have a role to play in defending and protecting human rights and democracy, both here at home and around the world,” he said.

Conservative Party Leader Erin O’Toole said in a tweet that the damage caused by communism and Nazism devastated the lives of generations of people and that his party “will always stand against brutal governments around the world.”

Ontario Premier Doug Ford said in a video on Twitter that “Never Again” should these tragedies repeat in the future, and counselled Canadians to “work together to build a better, safer and brighter future for all.”

Alberta Premier Jason Kenney paid tribute to the victims in a statement, condemning the Molotov–Ribbentrop Pact as “one of the most evil alliances” in human history, resulting in “decades of oppression and untold human suffering.”

Kenney noted that “although they were informed by different ideologies,” the Soviet Communists and Nazi Germany “made use of the same brutal tactics and strategies to commit murder on industrial scales and to enforce a system of oppression and tyranny on previously free peoples.”

“We must never forget the countless victims of these totalitarian regimes, we must take to heart the horrific and tragic lessons of that time, and we must honour those who fought so bravely and sacrificed so much to defeat these terrible forces.”

Cypress-Medicine Hat MLA Drew Barnes also emphasized remembering the sacrifices made by those who fought against “the abhorrent lessons” of the two regimes on Twitter.