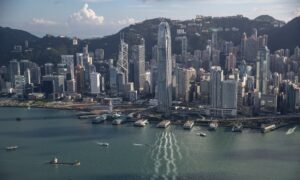 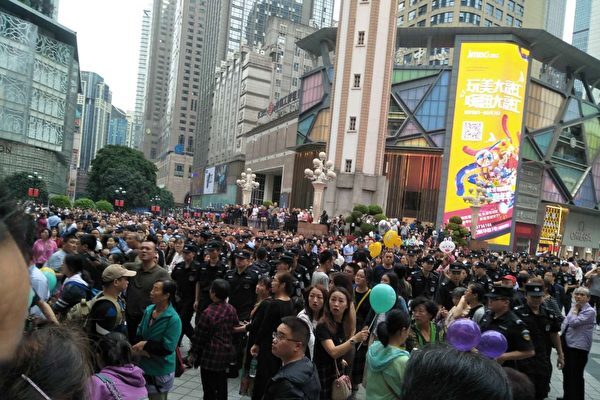 Local security forces in 17 cities across China sprang into action on Oct. 1, when large numbers of people gathered to protest the recent crash of the peer-to-peer (P2P) online investment industry that began this spring and left millions bereft of their savings.

The Oct. 1 activism coincides with National Day of the People’s Republic of China, referring to the date of the communist regime’s founding in 1949.

The demonstrations were well-attended, with some participants telling The Epoch Times that up to 10,000 P2P victims showed up in the protest to hold signs and shout slogans.

An unknown number of people were arrested and detained by the public security authorities, as China’s police are officially termed.

“The police arrested protesters, at least 3 to 4 were detained, some were injured,” said a protester in Wuhan, Hubei Province. Many protesters were at the site and the police blocked pedestrian areas.

Reports say that officials in Hefei, Anhui Province, went to the protest site and met with protesters outside a theater, but after the meeting, the police started to detain the protesters.

A protester in Hefei, said: “the police surrounded the venue. People were not allowed to leave or enter the site. The police beat protesters and detained the key participants.”

More people were present at the demonstration in Shanghai, and around 180 were arrested, according to a protester. In Beijing, police outnumbered the demonstrators and cordoned off the zone with checkpoints. Parking was prohibited at key locations such as subway stations, bus stops, and around Tiananmen Square.

Since April and May of this year, thousands of P2P online financial platforms have crashed, devastating the industry and leaving millions in financial ruin. Victims have petitioned the authorities for months without result, and some have committed suicide.

The protesters say that they will continue their activism.

Ms. Liao, a woman from Beijing who lost nearly 10 million yuan (about $1.5 million) in the P2P crash, spoke with The Epoch Times about her situation. She had invested money in hundreds of platforms over the past two years, when the industry received heavy state support.

“In a short period of time, several thousands of P2P lending platforms were established, which led to competition,” Liao said.

“In order to be competitive, many special offers were launched to attract investors. The money snowballed over time. When my investments in one platform matured, I would make a withdrawal. But if it made a special offer, I would put my money back in,” she said.

“But we had no way of knowing that they would run away with our money. Some platforms held meetings with all the investors, but the next day, all the executives ran off They didn’t leave any evidence and even their staff aren’t aware of what happened.”

Liao said that P2P investment had become addicting, and compared it to drugs and gambling.

“The current situation is like a game between the government and the citizens,” she said. “The government isn’t going to solve the problem. … The P2P lending initiative was started by the government, and now it is also the government that caused this problem, so it should foot the bill.”