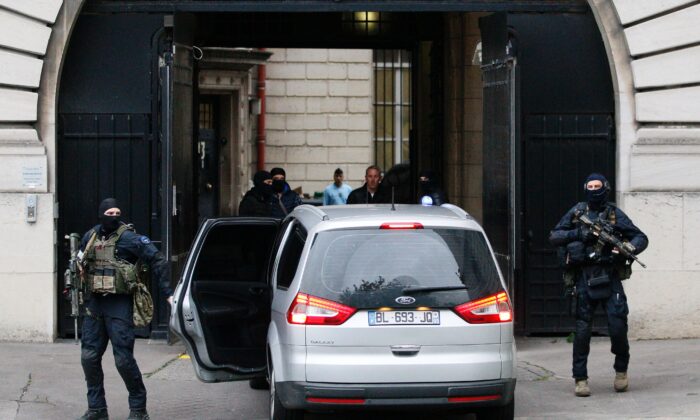 French police and members of the National Gendarmerie Intervention Group (GIGN) escort a convoy transporting a surviving member of the group that carried out Paris terror attacks suspect Salah Abdeslam to Paris courthouse in Paris on May 20, 2016. (Matthieu Alexandre/AFP via Getty Images)
Viewpoints

The transfer of sympathy from the victims of crime to the criminal has been going on for a long time. This transfer is now taken as a sign of broadmindedness and moral generosity, marking out the intellectual from the general run of prejudiced, thoughtless or censorious persons.

As long ago as 1828, Victor Hugo published a brilliant novella titled “The Last Day of a Condemned Man.” It consists of the thoughts and feelings of a man about to be guillotined. Horrified by the spectacle of capital punishment, which he had witnessed, Hugo makes us look realistically at the world through the eyes of a man who will soon be dead, not from disease but by order of his fellow men.

As authors are inclined to do, Hugo manipulated his readers’ emotions in the direction that he wanted, in this case by omitting completely to mention what the condemned man had done to merit his punishment. The narrator might indeed have been innocent, although he never claims innocence of whatever it is that he has been accused of. On the other hand, he might have been a sadistic child-killer: he doesn’t tell us, and we never discover. Hugo was aiming at the suppression of capital punishment, not that of crime, and irrespective of one’s attitude to capital punishment (I am against it), he hit his target brilliantly.

It is hardly surprising criminals take advantage of a tendency among the educated to view them as the victims of their own conduct. The criminals may be ignorant, ill-educated and foolish, but they are not therefore stupid. They know the emotional and intellectual weaknesses of their enemies or opponents and are prepared to exploit them.

A good example of this is the argument in court of Salah Abdelslam, the only surviving perpetrator of the attacks in Paris in 2015 that killed 130 people. Although he admitted that he wore a suicide vest and was part of the conspiracy, albeit a late addition to it, he claimed that at the last moment he decided not to detonate the vest because of a change of heart.

Of course, we have only his word that his change of heart was the reason that he did not blow himself up. His vest might have malfunctioned; he might have decided that, after all, he was not prepared to die, not being ready for all the virgins who awaited him after he did so.

In his own estimation, his failure or refusal to detonate the vest meant that he was innocent of the charge of murder (never mind his involvement in the conspiracy) because he didn’t kill anybody. On the contrary, he spared people’s lives which he might have ended. He presented himself almost as a humanitarian.

Then he produced another extraordinary argument: that if the court nevertheless found him guilty, it would discourage those who wore suicide vests from ever having second thoughts since they would be condemned to life imprisonment anyway. They might as well blow themselves up as refrain from doing so at the last moment. If they did, it would be the fault of the criminal justice system.

That such a sentence might be a) deserved and b) intended to discourage people from donning suicide vests in the first place, seems not to have occurred to Saleh Abdelslam: or if it did, as is more likely, he chose to counter with a bogus argument that he knew would appeal to that large section of the educated public that is anxious, above all, not to appear prejudiced or censorious, and to demonstrate its intellectual superiority by abrogating common sense. ‘Yes, he’s got a point there,’ one can almost hear them thinking; ‘we must practice harm prevention to encourage suicide bombers not to blow themselves up.’

Earlier in the trial, Abdelslam had used a version of the ‘root cause’ version of the cause of crime, according to which one must always seek for hidden rather than apparent causes. The real culprit of the terrorist attacks was not the band of perpetrators themselves, but François Hollande, then President of France, who had ordered military action in Syria. If it hadn’t been for him, they wouldn’t have acted as they did: therefore, he was the cause of the attacks.

This argument was interesting from more than one angle. First, it suggested that the perpetrators were more concerned about the suffering of distant people with whom they thought they shared a religion than with that of the people immediately surrounding them and with whom they lived cheek-by-jowl. Second, they ignored completely other means of expressing their dissent available to them as citizens of a free country. Third, and most importantly, they implicitly eliminated their own agency from their actions.

The root cause of crime is the decision to commit it: indeed, without such a decision, there is, or ought to be, no crime to answer. Of course, human decisions are affected by many factors, among them (but not exclusively) the likely adverse legal consequences for the people who make them.

Abdelslam was reflecting back the arguments that he had heard and are commonplace among the intelligentsia. There was a certain animal cunning in this, but such cunning is far from uncommon. When you are in a fix, you use any argument you can that might be useful in obtaining something for yourself: in the case of Abdelslam, kudos among his peers, the sympathy of sentimental intellectuals, or a reduced sentence.

I remember talking to an accomplished car-thief in prison. By the age of 21 he had stolen and sold (so he claimed) something like 600 cars.

‘Do you think, Doctor,’ he asked, ‘I am addicted to stealing cars?’

By addiction, he meant a condition that was completely beyond his control: something like a brain tumor. Interestingly, at the time, criminologists were interested in the idea of repeated crime as a bona fide addiction, and I suspect that this young man, who actually was quite charming despite the aggregate of misery he must have caused others, had got wind of this theory: and it was this that encouraged him to say, ‘It wasn’t really me, it was my addiction that did it.’

‘I think you enjoy stealing cars and, until now, you have benefited from it,’ I said.

From all accounts, Abdelslam is enjoying his day in court, making fools, as he thinks, of his judges.