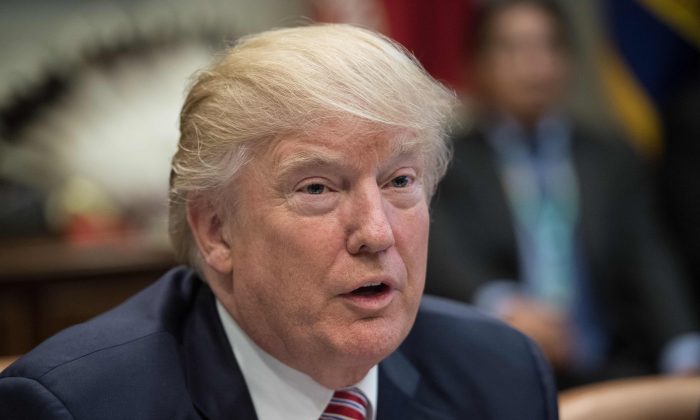 US President Donald Trump in the Roosevelt Room at the White House in Washington, DC, on June 28, 2017. (Nicholas Kamm/AFP/Getty Images)
US

Vice Media has retracted two articles critical of the Trump administration that were based on single anonymous source.

The stories, retracted on June 28, were discussing Walt Disney World’s Hall of Presidents, an attraction that features animatronic busts of U.S. presidents. A Trump lookalike robot is being added to the ride and Trump will likely record a speech the robot will reproduce, just as George W. Bush and Barack Obama did.

“The same thing that we’ve done with other presidents, is the same plan we have for President Trump,” said Jacquee Wahler, Disney vice president of communications, according to New 13.

But the Vice stories, relying on an anonymous source, claimed “much behind-the-scenes drama and internal machinations” surrounded the process.

On June 28, both stories were replaced by an editorial notice:

“After a thorough investigation into the sourcing of two stories, “Here’s the Secret Backstage Trump Drama at Walt Disney World’s Hall of Presidents” and “Behind the Scenes of Disney’s Donald Trump ‘Hall of Presidents’ Installation”, and the identification of several factual errors, we have decided to retract both pieces. We are conducting a full editorial review to pinpoint how this source was vetted, and how these stories were approved and published in violation of our usual editorial workflow. We fell short of our standards, and regret the error.”

The move comes on the heels of CNN’s June 23 retraction of a story claiming ties between Russia and the Trump administration, which resulted in CNN being threatened with lawsuit.

The story claimed that the Senate Intelligence Committee is investigating a Russian investment fund and the Treasury Department is “looking into” a contact between the fund’s CEO and Anthony Scaramucci, founder of investment firm SkyBridge Capital, who formerly served on Trump’s Presidential Transition Team Executive Committee.

After Breitbart published an article criticizing the CNN story on June 23, the network deleted the story from its website and later replaced it with an editorial note stating it “did not meet CNN’s editorial standard” and apologizing to Scaramucci.

Scaramucci had threatened CNN with a $100 million libel suit, according to The New York Post.

The writer of the CNN story and two editors above him resigned on June 26.