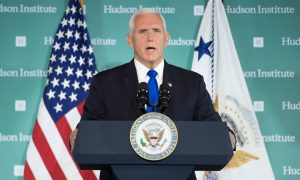 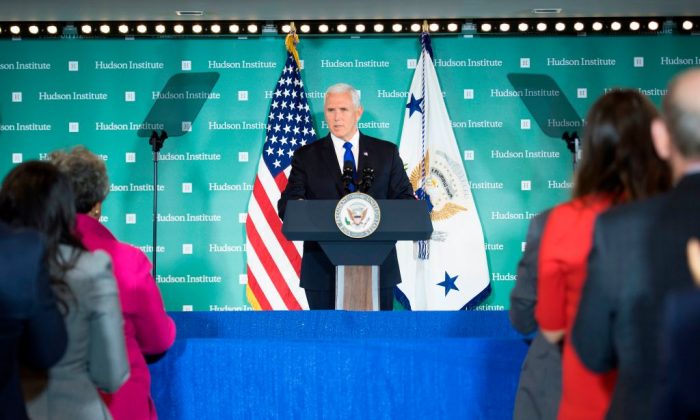 US Vice President Mike Pence addresses the Hudson Institute on the administration's policy towards China in Washington, DC, on October 4, 2018. - Pence on Thursday accused China of seeking a change of power in the White House, stepping up allegations of electoral interference. (JIM WATSON/AFP/Getty Images)
Thinking About China

US to Adopt a China Policy Based on Realism

Lao Tzu, the founder of Taoism, reminded us in the sixth century BC, “Let reality be reality.”

That seems to be precisely what U.S. Vice President Mike Pence did on Oct. 4, when he delivered a comprehensive policy speech on China at the Hudson Institute.

This speech was historic because no top official from previous U.S. administrations has offered such a straightforward analysis and narrative of U.S.–China relations since the normalization of diplomatic relations in 1979. It was also historic in giving U.S. policy toward China a new direction.

In “All’s Well that Ends Well,” Shakespeare wrote, “No legacy is so rich as honesty.” Despite the detailed accounts of Beijing’s influence operations in the United States and elsewhere in the world, Pence’s speech is seen by some as being “aggressive” or waging a new cold war.

For too long a time and for various reasons, the world has almost given up hope of seeing Washington stand up to the Beijing regime’s offensive for worldwide hegemony. Now, the Trump administration is speaking up for the interests of America and the rest of the world.

For more than two decades, many China watchers in the West, policy makers in particular, appear to have been deeply hypnotized by the illusion of the so-called “constructive engagement policy” with China, hoping that by integrating communist China into the global economy, democracy or an open society would somehow automatically come to the Middle Kingdom.

The United States’ good intentions helped China to rapidly become a world power. In June, in his address to the National Federation of Independent Businesses, President Donald Trump stated, “China has been taking $500 billion a year out of our country and rebuilding China,” a point that the president has repeatedly raised.

The policy of constructive engagement was based on a pipe dream that has brought about, in most cases, the opposite if not few results; Beijing is now impulsively seeking to set the rules for business as well as geopolitics around the world.

In his book, “The Great Delusion: Liberal Dreams and International Realities,” professor John Mearsheimer, a neorealism scholar, faults the so-called “liberal hegemony” for the failure of U.S. foreign policy since the collapse of the former Soviet Union.

In Mearsheimer’s view, the liberal approach of remaking the world in America’s image through advocating for an open international economy and building democratic institutions around the world hasn’t yielded a desirable outcome, because two greater forces—nationalism and realism—haven’t been factored in.

Mearsheimer said, “Trump eventually will have no choice but to move toward a grand strategy based on realism, even if doing so meets with considerable resistance at home.”

The most prevailing, if not the most detrimental, misperception of China among policy makers is the idea that the Chinese Communist Party (CCP) operates in accordance with so-called Asian values or norms rooted in the 5,000-year Chinese civilization; thereby, its peculiar actions are perhaps capable of being forgiven.

This understanding appeared in several responses to Pence’s groundbreaking speech; it couldn’t be further from the truth. As a matter of fact, since 1949, the CCP has been relentless in purging the best of the Chinese cultural heritage, succeeding in many aspects in disconnecting the past from the present.

It is little wonder that many first-time mainland Chinese visitors to the Republic of China (commonly known as Taiwan) have been surprised to find out that much of Chinese culture and traditions are actually better preserved on this island than in their homeland.

Should there be any “clash of civilizations” between the United States and China, it would, in reality, come down to the clash between the ideology of the CCP and the norms of Western democracy.

The traditional Confucian culture, as demonstrated in Taiwan, synchronizes in harmony with the Western democratic system. Being a Russian import, the CCP is, by no means, part of the Chinese legacy whatsoever.

On Dec. 2, 2016, President-elect Donald Trump’s phone call with Tsai Ing-wen, president of the Republic of China, was seen by many China-watchers as the first sign of departure from Washington’s decades-long protocol.

This significant gesture toward Taiwan was later followed by some senior U.S. officials’ visits to Taipei, as well as by unanimous congressional support for including provisions in the 2019 National Defense Authorization Act (NDAA) to strengthen Taiwan’s defense capabilities.

The support for Taiwan recognizes, as Pence said in his speech, that “America will always believe that Taiwan’s embrace of democracy shows a better path for all the Chinese people.”

Both the National Security Strategy (December 2017) and National Defense Strategy (January 2018) have communist China (and Russia to a lesser degree) clearly in mind as the top threat to America’s interests in Asia and elsewhere. These strategy documents temper what at least had been a hope that China wouldn’t be an adversary.

Less than a year ago, Trump toasted in Beijing for “a friendship that will only grow stronger and stronger in the many years to come” at a banquet with CCP leader Xi Jinping.

On Sept. 26, 2018, citing Beijing’s meddling in the U.S. midterm elections, Trump told the press at the United Nations General Assembly, “Maybe, he’s not [my friend] anymore, I’ll be honest with you.”

As Pence pointed out, “China wants a different American president.” Clearly, the icy relations with Beijing are now beyond the sheer dispute over trade alone.

At the Aspen Security Forum in July, FBI Director Christopher Wray spoke of China as “the broadest, most challenging, most significant threat we face as a country.”

The Telegraph reported on Oct. 9, “China has become the biggest state sponsor of cyber-attacks on the West.” According to The Telegraph, “CrowdStrike, which revealed the Russian hack on the Democratic National Committee in 2016, said China was now ahead of Russia as the most prolific nation-state mounting attacks on firms, universities, government departments, think tanks and NGOs.”

No matter who reads the Chinese tea leaves, one can’t help but notice an unconcealed roadmap of communist expansionism via its so-called “One Belt, One Road” initiative.

One Belt, One Road uses debt-trap financing to gain influence over other nations. In the military installations in the South China Sea, we see naked military power being exerted to put a potential stranglehold on the channels through which much of the world’s commerce flows.

Inside China, the most recent human-rights outrage involves herding hundreds of thousands of Muslim Uyghurs into concentration camps. Observers of the 18-year-old practice of forced organ harvesting from Falun Gong practitioners believe the techniques perfected against the Falun Gong are now being expanded against the massive population of detained Uyghurs.

Yet, what the CCP has been doing, either with violent suppression at home or belligerent aggression abroad, wasn’t met with any serious international challenge and rebuke until Trump moved into the White House.

Pence’s speech put China and the world on notice that the United States is now responding.

Over the years, the CCP’s hostility and resistance toward Western democracies haven’t been fully recognized by Western leaders, due to its longtime cultivation of close ties with some influential Western academic, business, and political interest groups.

But the “America First” administration is now seeking a level playing field with the CCP, not only in terms of trade and business, but also in geopolitical affairs around the world. If there is any Cold War, Beijing actually started it long before many policymakers in Washington were willing to openly admit it was taking place.

Cold War or not, Washington is finally embarking on a realist’s path in dealing with the party-state. Common sense tells us that it is wishful thinking to count on a wolf to turn into a vegetarian.

History shows the predatory nature of a communist regime has never been tamed by an appeasement policy or by wide-eyed liberalism; instead, it has been subdued by a realist’s approach of peace through strength, as well as by the moral courage to defend humanity.

On Oct. 8, 1951, in her campaign for a seat in Parliament, future British Prime Minister Margaret Thatcher articulated this basic insight, “The threat to peace comes from Communism, which has powerful forces ready to attack anywhere. Communism waits for weakness, it leaves strength alone.”

In October 1964, Ronald Reagan said: “Freedom is never more than one generation away from extinction. We didn’t pass it to our children in the bloodstream. It must be fought for, protected, and handed on for them to do the same.”

Despite waves of international and domestic challenges, an America that strives to protect its fundamental values will continue to be a global beacon of hope for freedom, democracy, and humanity.

Perhaps, the best policy advice for managing the CCP comes from the Chinese philosopher Confucius, “Repay kindness with kindness, but repay evil with justice.”