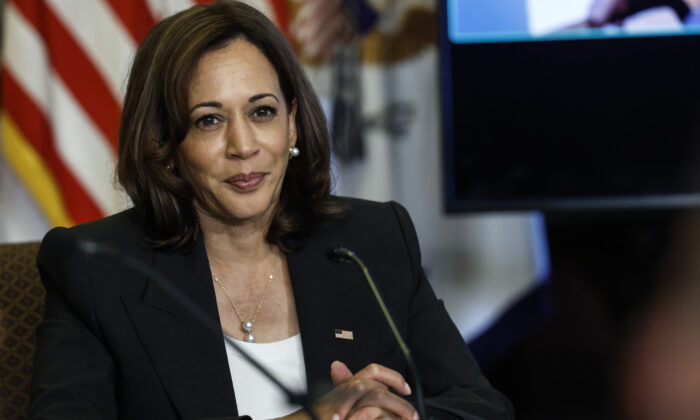 Vice President Harris Says Border Is ‘Secure.’ Now Migrants Are Showing Up at Her House.

On Sunday, Vice President Kamala Harris insisted that the southern border was “secure” in an interview on “Meet the Press.”

“The border is secure, but we also have a broken immigration system, in particular, over the last four years before we came in, and it needs to be fixed,” Harris told host Chuck Todd on the show. This echoed the administration’s message since President Joe Biden entered office.

On Thursday, two buses of migrants were dropped off in front of Harris’ house near the U.S. National Observatory in Washington, D.C. Texas Gov. Greg Abbott, a Republican, sent the buses, which picked up the migrants in Eagle Pass, Texas.

At the same time, Florida Gov. Ron DeSantis, a Republican, announced that he sent two planes of migrants to Martha’s Vineyard—a wealthy, liberal enclave in Massachusetts.

Immediately, Democrats and members of the media denounced these moves as political stunts, mean and immoral acts perpetrated by cruel Republicans. In one CNN segment with documentarian Ken Burns, a panel compared flying migrants to Martha’s Vineyard to the Holocaust.

Nazi comparisons are hardly a new tactic for the Left. Still, it’s important to note that culpability in this problem does not lie with a handful of Republican governors who’ve managed to offload a sliver of their border problems on blue cities. It’s on Biden and his administration, which have utterly eviscerated border enforcement, dropping the issue on border states like Texas and Arizona with little support and no solution.

Isn’t letting, at this point, millions of people into Texas, Arizona, and other states while calling the border “secure” already a political stunt? If that’s going to be the de facto policy of this administration, it seems reasonable to let sanctuary cities bear some of the cost.

These so-called sanctuary cities have reacted to a few busloads of asylum-seekers with extreme hysterics. Shouldn’t they be happy that asylum-seekers are showing up in their neighborhoods? After all, so many New York and Washington, D.C., neighborhoods put up signs saying that “all are welcome, no exceptions” and “refugees welcome.”

This is how Martha’s Vineyard officially responded to the asylum-seekers being dropped off there:

To our Island community, here is an update on current humanitarian crisis on Martha's Vineyard….we thank people for their continued help. pic.twitter.com/f9YRJSJPow

Of course, left-wing activists and the media are trying to spin this into a story about how the local community is banding together to welcome people in some great act of compassion unlike those cruel Republicans in Texas and Arizona.

It’s 50 people who’ve been there for a day. It’s one of the wealthiest parts of the country. What heroes.

How long until even these rote attempts to appear welcoming start to disintegrate? It’s easy to help a handful of people for a few days, but how about when this problem continues for years and the numbers are in the thousands per day and not just a few dozen?

Meanwhile, at the southern border, far poorer towns have been coping with hundreds and sometimes thousands of illegal immigrants and asylum-seekers showing up day after day for more than a year with their resources truly stretched to the limit.

Texas border towns like Uvalde, McAllen, Eagle Pass, and so many others have been truly overwhelmed for years. During President Donald Trump’s tenure, the flow of illegal immigration slowed, but under Biden it has ramped up to historic levels.

This sea of humanity came in large part because the Biden administration has systematically made enforcement of U.S. immigration laws difficult to impossible. Arrests are still being made at the border in the millions, but lawbreakers aren’t being prosecuted, asylum cases are left open indefinitely, and the federal government is giving every sign that the law won’t be enforced.

Don’t take my word for it. Here’s what an asylum-seeker said in front of Harris’ house on Thursday: “Everybody believes that the border is open … we see it on the news that everybody comes in illegally, so we do the same.”

👀A busload of illegal aliens was just dropped off outside Kamala Harris' residence.

A Venezuelan man in the group tells @GriffJenkins, "Everybody believes that the border is open…we see it on the news that everybody comes in illegally, so we do the same." #BidenBorderCrisis pic.twitter.com/PbCXcVJABv

They are coming by the hundreds of thousands and the millions because they know they can with little repercussion. This isn’t complicated. It’s much like how cities with rogue prosecutors who refuse to punish serious crimes are getting more serious crimes. The word gets out.

What’s happening on the border is a crisis amplified exponentially by wrongheaded policies and an absentee president. From Day One, this president signaled that he was uncommitted to border enforcement. For the most part, there is little border states can do to fix the problem when the federal government has no intention of helping and even seems to want to accelerate the issue.

DeSantis explained why he sent migrants to Martha’s Vineyard. It’s not because he wants to, he said. It’s because the federal government is failing its job to enforce border laws.

This is the right attitude.

It’s only fair that places like New York City; Washington, D.C.; and Martha’s Vineyard—the location of some of the wealthiest ZIP codes in the country—share the burden. If they want to be “sanctuary” cities, they are going to have to pay a real price now.

The border city of Uvalde, for instance, has a median household income of $41,622 as of the latest 2020 census numbers. The town has a population of just over 15,000 and it is over 80 percent Hispanic.

By contrast, according to the latest census numbers, Dukes County, Massachusetts—where Martha’s Vineyard is located—has a median income of $77,318 and is 3.8 percent Hispanic.

Sending migrants from Venezuela and Honduras to Martha’s Vineyard spreads diversity and the economic burden. Progressives should be celebrating and asking for more, right?

Thanks to Abbott, DeSantis, and Arizona Gov. Doug Ducey, rich liberals have a chance to show how truly welcoming they are instead of just uselessly virtue signaling.