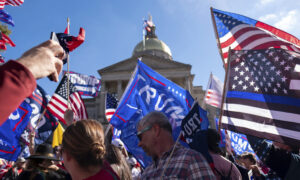 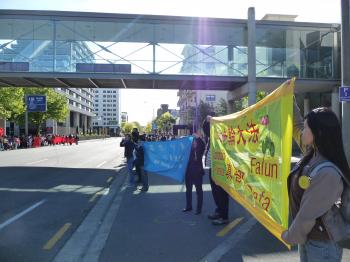 The vice-premier, who is considered the likely successor to Premier Wen Jiabao, arrived in Christchurch, New Zealand, on Sunday, November 1.

According to a press statement from the beehive, Mr Li Keqiang was in New Zealand for discussions on the economy, trade, climate and international affairs.

In anticipation of the vice-premier's arrival, Falun Gong practitioners rallied outside the Town Hall with banners to condemn the 10-year persecution of Falun Gong that is taking place in China.

Also awaiting the vice-premier were around two hundred supporters from the Chinese community who were waving red flags and loudly chanting Chinese Communist Party songs.

The peaceful ambiance changed quickly when the throng of Chinese supporters moved down the street and overwhelmed the nine Falun Gong practitioners.

“I was afraid when they surged towards us and relieved when the police showed up and stood in front of us,” said Maike Bittermann, a Falun Dafa Practitioner.

“At one stage, a single Chinese police office was stopping a crowd from trampling us. I was truly impressed with her bravery,” said another practitioner, Eric Robinson.

“But we held our ground, despite the intimidation,” said Mr Robinson.

After the convoy had passed, and the crowds dispersed Falun Dafa practitioners thanked police for their support to which one policeman replied "That is our job. That is what we are here for".

Vice-Premier Li Keqiang made a last stop in Auckland on Monday night where he stayed at the Langham Hotel.

Outside, a group of Falun Dafa practitioners who were displaying banners saying “Falun Dafa is Good” and “Stop the Persecution” were also jostled by Communist Party supporters attempting to screen the Dafa banners so they could not be seen.