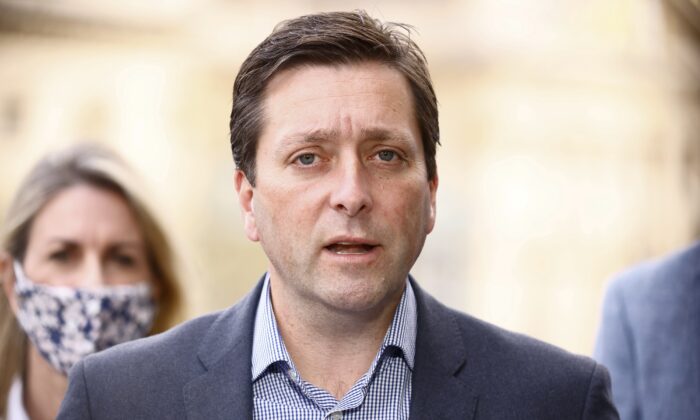 Leader of the Opposition Matthew Guy addresses the media during a press conference on the steps of Parliament in Melbourne, Australia, on Sept. 12, 2021. (AAP Image/Daniel Pockett)
Australia

Victorian opposition leader Matthew Guy has pledged Victoria won’t go back into lockdown if his government wins the next state election.

“Lockdowns have hurt our community. They’ve hurt people, our kids, our state,” he said at the Liberal Party’s official election campaign launch in Dandenong on Nov. 27.

“Over 90 percent of us are fully vaccinated, and that number will only increase. So as far as we’re concerned, lockdowns should be a thing of the past.”

Guy’s comments came on the same day thousands of protesters took to the streets of Melbourne’s CBD to rally against vaccine mandates and the controversial pandemic legislation.

The proposed pandemic legislation is currently at a standstill as the Andrews government continues to negotiate with crossbenchers to get one more vote to pass the controversial bill. The bill was expected to pass parliament last week with the support of three crossbenchers in the upper house but was stalled when former Labor minister Adem Somyurek announced his return to parliament and to vote against it.

Under the proposed legislation, which is set to be debated on Nov. 30, the premier and health minister have the power to declare a pandemic and the ability to enforce restrictions such as mask-wearing, vaccination mandates, quarantine for returned travellers and positive COVID-19 cases, and lockdowns.

“Lockdowns are, more than ever, a sign of policy failure. I don’t intend to fail when it comes to managing COVID,” Guy said, adding that under his government, lockdowns would only occur under “very, very limited circumstances” and that it was time for the state to move towards “positivity” and a “new style of leadership.”

“We’re sick of the negativity from the current government—the state of emergencies, state of disaster, the hectoring, lecturing, the division, and the Premier who fights with everyone.”

When asked whether the new Omicron variant of the CCP virus could affect his plans, he said, “we have to learn to live with this.”

“What’s the point of being double vaccinated or having booster shots? We haven’t achieved anything if we’re still considering lockdowns.

“We’re going to have an Andean variant, an Uruguayan variant; we’re going to get all variants for the next couple of years. We can’t have the government threatening to lock us down every single time.”

Meanwhile, Victoria’s chief health officer Brett Sutton said the new Omicron variant of the coronavirus was likely to be an especially transmissible strain that was potentially resistant to vaccines.

“We will have a much better understanding in terms of the global spread but also whether it’s here in Victoria and indeed some of those issues around severity and illness may become clearer even in the next couple of days,” he said on Nov. 29.

All international arrivals to Victoria, New South Wales and the Australian Capital Territory are now required to quarantine at home for 72 hours, while visitors from one of the nine African countries of concern will have to quarantine for two weeks, following the emergence of the Omicron strain.