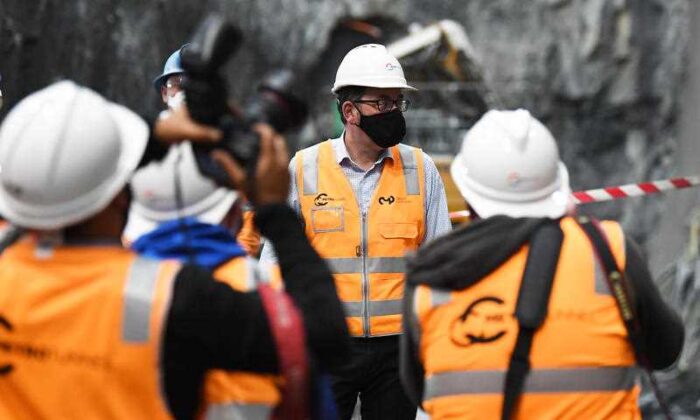 Vaccination uptake will also be prioritised with the state opening four vaccination centres for construction workers over the next two weeks, treasurer Tim Pallas announced on Sept. 13.

This follows previous calls from industry groups for tens of thousands of construction workers to get vaccinated by Christmas to prevent site shutdowns. Currently, construction sites can operate with a 25 percent cap.

“Many people working in construction are young, highly mobile and unvaccinated,” Pallas said.

“What’s become clear to us is that the construction industry remains a major source of transmission.

“Given the increased public health risks, the joint operation will have a ‘zero tolerance approach and will apply fines and prohibition notices to fix any serious non-compliance.”

Pallas also warned the industry was put “on notice,” and could risk losing its permitted worker status if “responsibilities” were not taken seriously.

“I need to be clear about this; there will be zero tolerance,” he said.

Further, 50 teams made up of authorised officers, WorkSafe Inspectors, and Victorian Building Authority employees will be inspecting worksites to ensure compliance.

“We’ve heard from the industry itself who’ve told us they want more enforcement, and they want us to address those aren’t doing the right thing,” he said.

According to a Master Builders of Victoria (MBV) statement, authorities had found “weak or non-existent COVIDSafe plans and limited use of QR codes” at some job sites, with mask compliance being a recurring theme.

The Acting Chief Health Officer (CHO) also found workers were interacting outside their worksite bubbles—such as congregating closely in tea rooms, and visiting relatives outside of work, according to the MBV.

“With the levels of community transmission we are now seeing across many of our suburbs, it is so important that we have outstanding controls in place at every single worksite that is still operating,” COVID Commander Jeroen Weimar said on Sept. 9.

Additionally, authorities are concerned with the geographical spread—with the average infected construction worker living about 20 kilometres away from their workplace. That compares to 4 kilometres for the average case in the outbreak.

However, opposition health spokeswoman Georgie Crozier said the state government was playing “catch up,” and it should immediately introduce rapid antigen testing on building sites.

“This is the ideal scenario where you would put rapid testing in place,” Crozier said.

The state government confirmed it would provide Incolink—an industry fund supporting construction workers—with an “unlimited supply” of AstraZeneca. Some 20,000 further priority Pfizer appointments will also be made available to construction workers.

Master Builders Victoria (MBV) CEO Rebecca Casson previously told The Epoch Times that Incolink had the capability to deliver 40,000 vaccinations on-site, “all they need is a green light from the Federal Government and a start date.”

The construction industry was previously told the 25 percent cap could double if 90 percent of workers had one dose.

While the Victorian Chamber of Commerce and Industry has welcomed both the compliance crackdown and vaccination drive, it wants “greater clarity” on how the 90 percent vaccination rate will be documented.

Of the 3507 active cases recorded in the state, 13 percent are directly linked to construction sites.