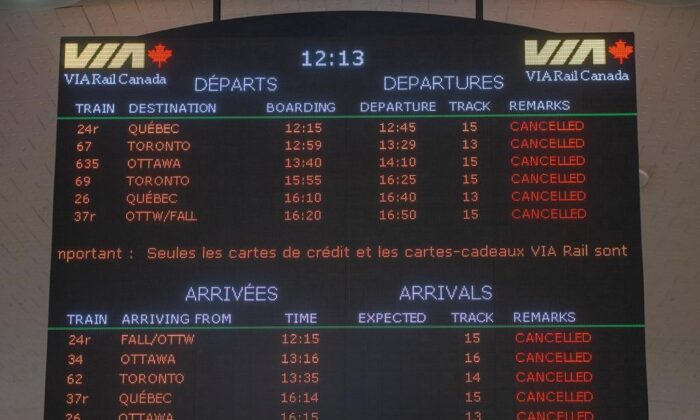 Cancelled rail arrivals and departures are listed on the board at Central Station in Montreal, Canada, on Feb. 14, 2020. (Ryan Remiorz/TheCanadianPress)
Canada

Via to Partly Resume Service Between Quebec City and Ottawa on Feb. 20

Almost all other Via Rail services remain cancelled with the exception of Sudbury—White River and Churchill—The Pas, until further notice.

Via trains have been disrupted by protests by people showing solidarity with the hereditary Wet’suwet’en chiefs opposing the Coastal GasLink project.

Protestors have blocked rail lines across the country and disrupted freight and passenger traffic.

Via says the partial resumption of service between Ottawa and Quebec City follows a notification received from Canadian National Railway.

Only trains that serve full trips between Quebec City and Ottawa will resume service.