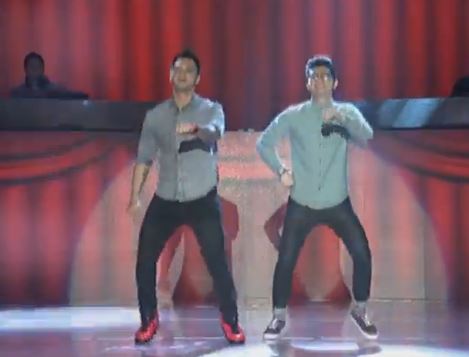 Vhong Navarro and Billy Crawford reunited on the dance floor for the first time in over a month on the ABS-CBN program “It’s Showtime,” on which they are co-hosts.

The audience went wild for the pair as they performed in nearly matching outfits, apart from the shoes.

Crawford and Navarro are known for their “BillyVhong” dance during the show’s “Sine Mo To” segment.

The dance happened six weeks after Navarro was beaten on January 22, leaving him hospitalized.

He returned to “It’s Showtime” for the first time on Saturday, sending the shows ratings to fourth overall, just behind fellow ABS-CBN programs “MMK”, “Wansapanataym”, and “Bet On Your Baby.”

Navarro began the “Sine Mo To” segment with Jhong Hilario before Crawford joined in.

Navarro faces two separate rape complaints, one from the January 22 incident from Deniece Cornejo, and another from Roxanne Cabanero from 2011. However, evidence in both cases points to Vhong’s innocence. Both cases are currently in proceedings.