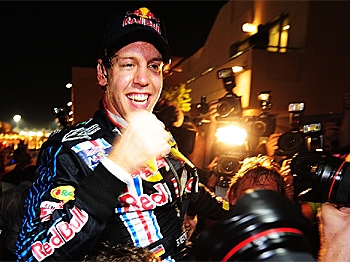 By James Fish
Print
The 2009 Formula One Grand Prix season ended with another one-two finish for Red Bull, as Sebastian Vettel proved the fastest car and driver the track, while teammate Mark Webber barely held off a charging Jenson Button’s Brawn on the final lap. This was Red Bull’s fourth 1–2 finish of the season (Brawn also had four.)

Barrichello’s Brawn finished fourth, four seconds down, with Nick Heidfeld’s Williams three seconds behind him. Kamui Kobayashi in the Toyota turned in the drive of the race, finishing sixth in only his second Formula One grand prix.

The victory moved Vettel into second in the drivers’ Championship.

“The car was fantastic and was working brilliantly on both tire compounds, Sebastian Vettel said after the race, “It was a pleasure, this evening, to be in the car.

“Some of the season was up and down. During the second half we have been very strong; fourth 1–2 for Red Bull racing, so congratulations to the team. They have been pushing a lot, working a lot back in the factory. As we can see the car is getting quicker. It is shame that now the season ends.

It’s just a perfect day, to finish the season on a high.”

Indeed, Red Bull has been the only team to consistently challenge the Brawns; once the team adopted a Brawn-style double diffuser after Turkey, Red Bull shut down Brawn almost entirely. Abu Dhabi marked Jenson Button’s first podium in since Italy, only his second in the last ten races. Barrichello managed two wins after Turkey, while Red Bull scored five.

Obviously Sebastian Vettel and Red Bull Racing will be high on the list of contenders for next year’s World Drivers’ Championship.

The start was almost clean. Mark Webber, head of the Drivers’ Safety Committee, was involved in yet another first lap collision, chopping Barrichello and tearing off his right front wing end plate. However, the missing end-plate seemed not to have slowed him.

As usual, Webber’s version of the incident has him blameless. “I had a pretty good launch I got a bit of a lock on the outside of Seb [Sebastian Vettel] but the main game was trying to get back on the inside to get a clean exit because I knew it was a long run down to turn Five. I got hit quite hard in the left rear at the first corner; I was worried about a puncture. I was quite relived I didn’t have a puncture.”

Quite possibly Rubens Barrichello was equally relieved that Webber’s aggression didn’t put him out of the race.

From the start, pole-sitter Lewis Hamilton’s McLaren had a hard time. Hamilton used KERS on the very long back straight to open a 1.7-second lead over the Red Bulls, but lost half of it by lap 10. Hamilton’s McLaren could be seen sliding almost off at several corners, and while he turned some fastest laps, overall he lost time.

Unable to create a gap, Hamilton lost the lead to Vettel on the first round of pit stops.

On lap 20 the McLaren pits radioed Hamilton, “We might have a right rear brake problem I’ll keep you posted.”

A few laps later Hamilton was in the garage with his first mechanical DNF of the season. “I was struggling almost from the get-go. I couldn’t get the brakes up to temperature,” Hamilton explained.

Jaime Alguersauri added a bit of drama to the first round of pit stops as he drove past the Toro Rosso pits and pulled into Red Bulll as Vettel was also on his way in. Alguersuari realized his error and roared out just as Vettel headed in, avoiding a delay which might have cost Vettel the lead. Alguersuari then ran out of fuel on the track.

Vettel was fast and smooth and absolutely the class of the field, opening a huge gap. He turned the fastest lap many times during the course of the race, finally setting the record on lap 54.

Jenson Button showed his talent in the final ten laps of the race, as he reeled in Mark Webber, though he was unable to get past. Button made several daring attempts on the final lap, pulling up even but never quite able to make it stick.

“I couldn’t make the move stick. I was very excited about that battle and I thought I could pull it off, but Mark [Webber] is always a very difficult person to overtake, Button explained. “We were clean, but on the edge, so it was perfect. I was disappointed not to get second place, but I really enjoyed the fight today.

For his part, Webber showed remarkable restraint; apparently he only crashes the competition on the start. In any case, the final laps were filled with clean, hard racing; both drivers were sliding and fishtailing trying to brake and accelerate earlier than the other.

“I had not much of a feeling on the Option, and I was quite slow on that tire,” Webber said. “I thought, ‘This is going to be quite tight,’ at the end. I just had to be sure to be accurate with my braking points. We know he [Button] had a slight top-speed advantage but not much. At the end, we had a good clean fight, on the limit for the two big stops [in the hardest braking zones.]”

Heikki Kovalainen in the only running McLaren finished eleventh, just ahead of Kimi Raikonnen in the Ferrari, winning McLaren third in the 2009 Constructors’ Championship, and closing out what, for Ferrari, is probably their worst season since 1993.

The debut race at the Yas Marina track went off successfully, and the 2009 Formula One Grand Prix season closed with a great battle.

After Brawn’s early domination (after Turkey, many were saying the season was over) Red Bull, and McLaren in particular, fought back to field winning cars. Both teams face 2010 full of promise.

Ferrari gave up halfway through, choosing to concentrate on their 2010 car, though Kimi Raikkonnen made Herculean efforts to bring them some podiums. The struggles of Luca Badoer and Giancarlo Fischella show what an ill-tempered beast the 2009 Ferrari was. (Down on power, down on aero, Kimi said; what else can a race car lack?)

Raikonnen will be gone in 2010, replaced by Fernando Alonso. Jenson Button is in talks with Brawn, but may be leaving; Barrichello is predicted to be leaving as well. Too many other rumors are flying, to be sure what the teams will look like next season. It is not yet certain which new teams will be added, or if Sauber (which bought the BMW team) will be allowed on the grid.

Cosworth will supposedly be providing engines to the majority of the grid in 2010. It is uncertain if Sauber (BMW, rumored to have the best engine (better even than Mercedes)) will be powering its own cars, should they race.

The Epoch Times will report driver and team rosters once it is finalized and confirmed.

The first race of the 2010 season is scheduled to be the Formula 1 Bahrain Grand Prix (Sakhir) on March 14. Fans can register to be emailed with advance ticket and travel information once the date is confirmed, at the Formula 1 Web site.