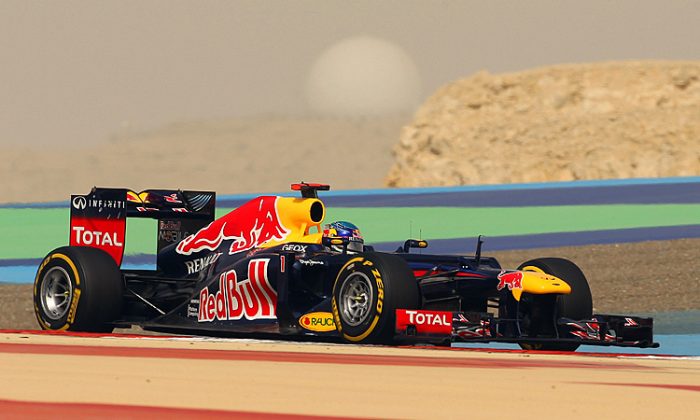 Sebastian Vettel, Red Bull Racing’s wunderkind, has finally found his form for the fourth race of the 2012 Formula One season, taking pole for the Bahrain Grand Prix from McLaren’s Lewis Hamilton by .008 seconds.

Mark Webber qualified his Red Bull RB8 third; the session brought the best qualifying results of the season for both Red Bull drivers.

“Yeah, it obviously feels great and I think this one I completely owe it to the team, to the guys,” Vettel said in the post-qualifying press conference on Speed-TV. “It wasn’t the easiest start to the season for us. we’ve been extremely busy working on the car, trimming here and there, finding the perfect solution and the right way to go, the way forward. And the boys – I don’t think they had much sleep to be honest in the first four races.

“The car felt much better all weekend. I was quite happy. I didn’t have the smoothest qualifying. I was nearly out in Q1 and nearly out in Q2 but then I knew that when I get the lap in – I nail it – then we should be in a better place. It’s great, obviously, to see that we’ve just beaten Lewis for pole, so I’m very happy.”

“I think it’s always tough. The race here is long and anything can happen,” he replied. “I think we are pretty aggressive and we should be better off in the race. I’m definitely happier with how the car feels and we should be able to hopefully get the same kind of feeling and result tomorrow.

“You’re obviously dealing here with the top three but I think there are also other people tomorrow who will have a very good chance. I think Nico has been very, very strong all weekend, and the Lotus guys they can surprise. So, in terms of race pace, I think everyone will be much closer together and I just hope we can keep it up and have a good result tomorrow.”

Both McLaren drivers said that the start would be crucial.

“Fingers crossed for tomorrow: both Red Bull drivers will be very hard to beat in the race, but we’re less than a tenth behind on race pace,” said Lewis Hamilton in a team press release. “The start could be key—we’ve had good launches all season so I expect us to be able to challenge Seb [Vettel] down to Turn One.”

Button agreed. “The car is definitely a lot better than it was yesterday—we made some improvements overnight,” he said. “We’d expected the Red Bulls to be very quick in qualifying, so to be close to them is a positive. A nice surprise is that we’re ahead of Nico [Rosberg] who was on pole just a week ago.

“A good launch tomorrow will be very important – both Lewis and I will be starting on the dirty side of the grid, which makes things more difficult, so we’ll need to get it right. Tire management will be crucial too.

“I’m looking forward to the challenge.”

Tire degradation was a prime topic of discussion; some teams were considering not running if they made Q3, to both save tires and to gain the option of starting on the harder Prime tire. Teams starting on the softer Option tire can expect at best half-a-dozen good laps, with temperatures hitting 100 degrees and the cars on full tanks at the start of the race.

The top five qualifiers waited until seconds before the end of the session to take their flying laps; every team was trying to conserve tires before. Torro Rosso’s Daniel Ricciardio and Renault’s Rene Grosjean each did only a single lap; Ferrari’s Fernando Alonso did part of a lap and didn’t even set a time; neither did Force India’s Paul di Resta.

Button and Rosberg both locked up their left fronts in Turn Ten on their final hot laps, otherwise either might have finished better.

Mercedes’ Michael Schumacher didn’t make it out of Q1. His exotic front-wing-stalling system malfunctioned; the seven-time champion will start eighteenth.