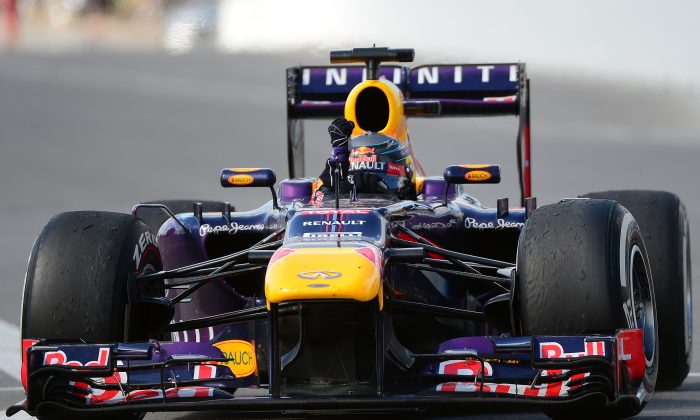 Sebastian Vettel of Red Bull pumps his fist in triumph after winning the Formula One Canadian Grand Prix at the Circuit Gilles Villeneuve in Montreal on June 9, 2013. (Emmanuel Dunand/AFP/Getty Images)
Motorsports

Sebastian Vettel used his now-familiar “start from the pole, get beyond DRS range early and win by a mile” strategy last Sunday as the Red Bull driver easily scored his first-ever victory in the Formula One Canadian Grand Prix.

Vettel and the Red Bull chassis were an untouchable combination; he qualified a tenth quicker than Lewis Hamilton of Mercedes, winning his third pole in Canada, and led all but three laps.

Vettel had a gap of two seconds by Lap 2, and 3.2 seconds on Lap 3, when the Drag Reduction System was enabled. DRS gives a trailing driver a huge advantage in catching a car ahead, but only if the trailing car is within one second of its prey. Vettel was never within range to be prey.

However, it was not a flawless race for the 26-year-old triple-champion: He brushed the wall exiting the chicane on Lap 11 and missed the chicane on Lap 52, losing a few seconds running down the escape road. Neither bobble was enough to significantly slow the young German driver—he was 14.4 seconds ahead when the checkered flag waved on Lap 70.

“I had a very good start, which was important, and then I was able to really go with the car,” is how Vettel explained his win from the podium, according to F1.com.

“I was able to build a gap and then kept that gap basically the whole race. At some stages we had a full pit stop on hand and it’s a little bit easier then to control the race, control the gaps et cetera.

“Great race, great job by the team. I had perfect pit stops even though we had some time on hand. I could really enjoy every single lap.”

It was Vettel’s first win at Circuit Gilles Villeneuve—he crashed while leading on the last lap in 2011—and his third of the season, raising his career total to 29, sixth most of all time and only two behind F1 legend Nigel Mansell.

Vettel also extended his points lead to 36 over Ferrari’s Fernando Alonso, who finished second after a tremendous duel with Lewis Hamilton of Mercedes.

Hamilton is now fourth in the points with 88 to Vettel’s 132; Kimi Raikkkonen of Lotus is third with 88.

Vettel had the race all but won in 2011, but skidded on the wet track on the final lap and gave the win to Jenson Button.

He didn’t fare so well in the race, finishing 14th, but Sunday was dry and sunny, so the flaws of the Williams chassis masked his driving ability.