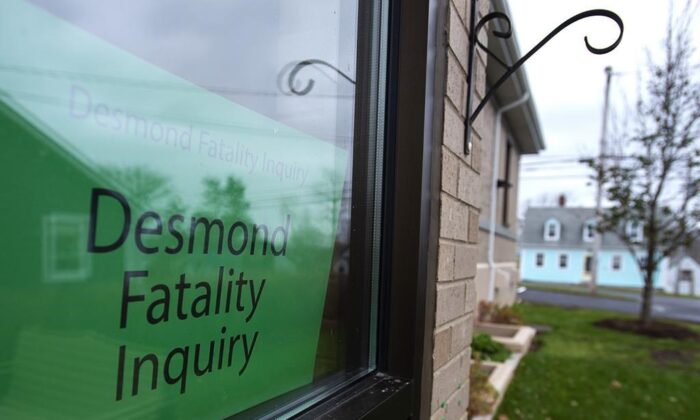 The Desmond Fatality Inquiry is being held at the Guysborough Municipal building in Guysborough, N.S. on Nov.18, 2019.(Andrew Vaughan /Canadian Press)
Canada

GUYSBOROUGH, N.S. — A New Brunswick doctor who specializes in treating veterans with PTSD apologized today for comments he made about the Department of Veterans Affairs during testimony before a fatality inquiry in Nova Scotia.

Paul Smith was testifying before a provincial inquiry that is investigating why Lionel Desmond, a mentally ill former soldier, killed three family members and himself in Big Tracadie, N.S., on Jan. 3, 2017.

On Monday, Smith offered a harsh assessment of how Veterans Affairs deals with those who are leaving the military for medical reasons, which was the case for Desmond in June 2015.

Desmond had been diagnosed with severe post−traumatic stress disorder and major depression in 2011 after he served in Afghanistan in 2007.

Smith told the inquiry that soldiers given medical discharges for PTSD are chastised, treated like “lepers” and “cast to the wind.”

The family doctor, who mainly treats veterans with PTSD using medical cannabis, also suggested Veterans Affairs lacked warmth when dealing with clients and placed too much emphasis on pills and psychotherapy, which he described as “pathetic.”

“The discharge programs are lacking tremendously,” Smith told the inquiry on Monday. “We have other nations that do it correctly.” He later mentioned Israel as an example.

Smith said communication with the department was lacking, which eroded trust.

“A typical conversation with DVA is — I’m on the phone for half an hour listening to music, and when they do talk to you, it’s like they don’t know anything about you,” Smith said Monday. “You’re just a number.”

During testimony on Tuesday, Smith apologized for those comments when challenged by a lawyer representing the federal government.

Lori Ward said the inquiry can expect to hear testimony from Desmond’s Veterans Affairs case manager, who will testify how she tried to bend the rules to ensure the former infantryman received proper “continuity of care.”

Ward said the woman is also expected to tell the inquiry that she volunteered to drive Desmond to the airport in March 2016 when he was scheduled to take part in a residential treatment program at a hospital in Montreal.

“Does that sound like a lack of warmness to you?” Ward asked Smith.

Smith replied: “There’s good people in the DVA system, and I apologize for a sweeping statement that may have presented otherwise. (However), it remains the attitude of many vets is that it’s a constant struggle to deal with DVA in terms of attitude.”

Smith’s testimony was considered pivotal to the inquiry because he was the one who signed off on a medical form that allowed Desmond to purchase the semi−automatic rifle he used in the killings in 2017.

The inquiry has heard Smith prescribed medical marijuana to Desmond in July 2015, only six days after he officially left the military.

When the two men met for a follow−up visit on Feb. 23, 2016, the retired corporal presented the doctor with a medical assessment form from the chief firearms officer in New Brunswick.

The form said Desmond’s firearms licence was under review because he had indicated to his wife Shanna he was contemplating killing himself with a rifle he owned on Nov. 27, 2015 when he was living in Oromocto, N.B.

He was arrested under the province’s Mental Health Act and his weapons were confiscated in New Brunswick and Nova Scotia.

Lawyer Thomas Macdonald, who represents Shanna Desmond’s family, asked Smith if those events were “red flags” that could be seen as reasons for rejecting Lionel Desmond’s bid to have his firearms licence reinstated.

Smith testified that he believed the retired soldier when he said his actions were the result of a “fleeting angry moment when he said some things he didn’t mean.”

Smith told the inquiry it was his assessment Desmond was responding well to treatment and wasn’t a threat to himself or others.

“Non−suicidal and stable,” Smith wrote on the form on Feb. 23, 2016. “No concerns for firearms usage with appropriate licence.”

On Jan. 3, 2017, Desmond bought a Soviet−era SKS 7.62 carbine, which he used later that night to kill his 31−year−old wife Shanna, their 10−year−old daughter Aaliyah and his 52−year−old mother Brenda inside the family’s home in Upper Big Tracadie, N.S.

He then turned the gun on himself.