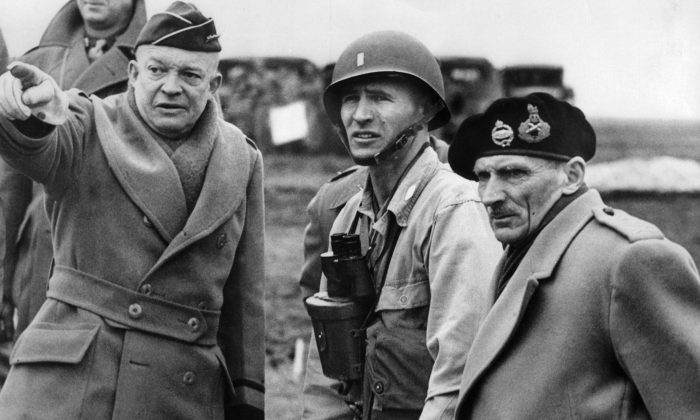 Supreme Commander of the Allied Forces, General Dwight D. Eisenhower (L) shows the strain of his command as he and Britain's Field Marshal Bernard Montgomery (R), his deputy commander, confer on the invasion plans of Normandy in an unknown location in June 1944 after Allied forces stormed the Normandy beaches on D-Day. D-Day, 06 June 1944 is still one of the world's most gut-wrenching and consequential battles, as the Allied landing in Normandy led to the liberation of France which marked the turning point in the Western theater of World War II. (AFP/Getty Images)
Europe

PARIS— Allied veterans and families of their fallen comrades gathered Saturday at the U.S. cemetery overlooking Omaha Beach to mark the 71st anniversary of the D-Day invasion that helped defeat the Nazis in World War II.

Visitors and cadets from the United States Naval Academy in Annapolis, Maryland watched as a bagpipe band paraded at the Normandy American Cemetery in Colleville-sur-Mer, amid the thousands of white marble crosses and Stars of David of servicemen and women who lost their lives during the invasion.

The invasion began shortly after midnight on June 6, 1944, with a perilous airborne operation led by paratroopers of the “Screaming Eagles” 101st Airborne and the 82nd Airborne divisions.

At dawn, thousands of Allied troops leaped out of landing craft to storm the beaches under ferocious German attacks.