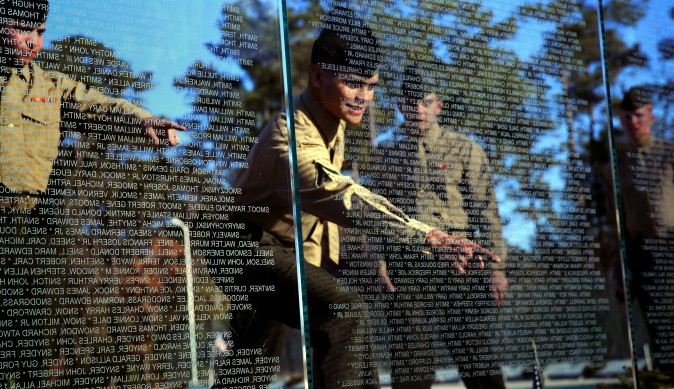 Vets Fight to Add Names of 74 Sailors to Vietnam Memorial

ALBANY, N.Y.— Stephen Kraus was standing night watch above the pilot house of the USS Frank E. Evans when he spotted the towering outline of the Australian aircraft carrier bearing down on the American destroyer. The 22-year-old sailor from California dashed off to signal a warning, but it was too late.

The HMAS Melbourne T-boned the Evans, knocking the destroyer on its side and splitting it in two. Nearly 200 sailors survived the collision on the South China Sea on June 3, 1969, most of them saved because the stern section remained afloat. But 74 sailors died when the bow section sank within three minutes in waters more than a mile deep. Only one body was recovered.

The tragedy happened at the height of the Vietnam War, but the names of the 74 lost sailors aren’t on the Vietnam Veterans Memorial in Washington, D.C., because military officials said the accident occurred outside the combat zone. Getting the names added to the wall has become a mission for the survivors and the families of the fallen sailors.

“They deserve it, just like the rest of their brothers that died in the Vietnam War,” said Kraus, a retired utility supervisor from Oceanside, California, and vice president of the USS Frank E. Evans Association.

Kraus was among two dozen crew members plucked from the sea by the Australian navy. A sailor standing watch with him — Marcus Rodriquez of Fresno, California — also survived despite severe injuries from being catapulted off the Evans and landing on the carrier’s deck.

After years of rejections by the Pentagon, Evans veterans believe they have their best opportunity at getting the names added to the Vietnam Memorial now that U.S. Sen. Charles Schumer is on board. The New York Democrat, considered a likely successor to retiring Senate Democratic Leader Harry Reid, recently urged military officials to reconsider the group’s request.

“It just makes no sense not to put them on the wall,” Schumer told The Associated Press. “They risked their lives for the country like everybody else.”

The World War II-era USS Evans was among more than 40 warships conducting a nighttime exercise as part of Southeast Asia Treaty Organization maneuvers about 100 miles from the Vietnam combat zone. Just a month earlier, the ship had provided fire support for ground operations during the destroyer’s fifth Vietnam tour. According to Kraus, military plans called for sending the destroyer back to the war zone after the SEATO exercise.

Evans survivors point out that the Vietnam Memorial already bears the names of American servicemen who died outside the war zone, including 58 Marines killed in 1965 when the plane returning them to Vietnam after a leave in Hong Kong crashed upon takeoff.

“We’re not asking for an exception, we’re asking for the same honor and respect that has been given to other individuals,” said Randy Henderson of Westfield, New York. His brother Terry, a 21-year-old radarman, died when the aircraft carrier sliced through the Evans’ communications center located in the middle of the ship.

“Most people have never heard of it,” Randy, who was 13 when his brother died, said of the tragedy.

The other Evans 74 include three brothers from Niobrara, Nebraska — Gary, Gregory and Kelly Jo Sage — and Lawrence J. Reilly Jr., a California native whose father also was serving aboard the destroyer and survived the disaster.

The Evans was based in Long Beach, California, which was the home state of 22 of the 74. In March, all 22 names were added to the state’s Vietnam Veterans Memorial in Sacramento. That tribute, plus Schumer’s backing, is giving survivors of the Evans disaster renewed hope that their fallen comrades’ names will be added to the wall in Washington after more than a decade of rejection.

“We’re highly confident that this is the effort that makes it happen,” Kraus said.