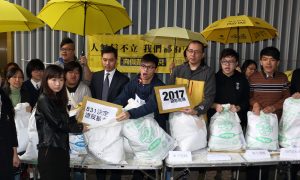 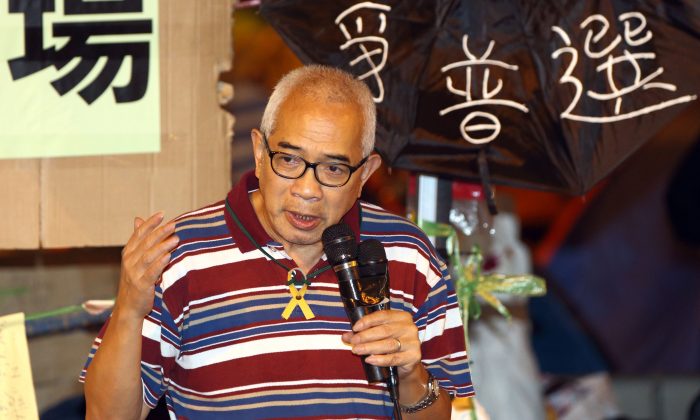 HONG KONG—Pan-democrats in Hong Kong’s Legislative Council (LegCo) have said they will veto a Beijing reform package that would restrict Hongkongers’ universal suffrage for the 2017 Chief Executive election.

Pan-democrats make up 40 percent of the LegCo, and the package would have to be passed in the LegCo with a two-thirds majority before it could be submitted to Beijing for approval.

The National People’s Congress Standing Committee (NPCSC) decided last Aug. 31 that Hongkongers can elect their Chief Executive in 2017 as long as a Beijing-controlled committee nominates all the candidates. Recent comments from Beijing officials show that they still support this decision.

“He reaffirmed that the 8.31 resolution is about the decision right of the central government over the election of the chief executive, which must have its own constitutional basis,” Woo said.

Chan Wing Kee, a member of the CPPCC Standing Committee, quoted Zhang Dejiang as saying that the electoral reform package had entered the final stage, and “the key is whether the Legislative Council can pass the general suffrage bill proposed by the Hong Kong SAR Government.”

NPC Law Committee chairman Qiao Xiaoyang commented on the pan-democracy camp’s declaration to veto the bill, which is based on the Aug. 31 resolution.

Qiao emphasized that the resolution could not be modified. When asked whether there is any chance of compromise when facing judicial review, Qiao said there is “no space at all.”

NPCSC Deputy Secretary-General Li Fei, who is responsible for explaining the NPCSC’s resolution, also said that the resolution could not be modified. However, China Vice Chair Li Yuanchao, who is also in charge of Hong Kong and Macao Affairs, would not comment on the issue.

As a senior journalist who is familiar with Chinese affairs, Ching Cheong believes that the Beijing officials’ comments show the strained relationship between Beijing and Hong Kong.

“If Beijing insists on implementing the 8.31 resolution, which itself violates the constitution, I think the only choice for Hong Kong is to veto it,” Ching said.

“According to the Basic Law, Hong Kong clearly has three types of power: executive, judicial and legislative power. But in the White Paper, three powers are abridged to two; the executive power is missing. So this is completely unconstitutional,” Ching said.

Zhang Dejiang had asked the Hong Kong people to “accurately understand the Basic Law.” Ching Cheong countered that Beijing must comply with the Basic Law first.

According to Ching Cheong’s analysis, the current situation indicates that the electoral reform package certainly will not be passed in the LegCo. If the reform package is rejected, Hong Kong Chief Executive Leung Chun-ying will have to step down, Ching said.

Because I remember there is a clause in the Basic Law that if an important government bill is rejected, the Chief Executive will be impeached;
— Ching Cheong

“If the impeachment is passed, then the Chief Executive may have to resign. If the 8.31 resolution is not passed, Leung Chun-ying should be the first to resign,” Ching said.

Hong Kong’s pan-democracy camp, academic communities, and social organizations have continued to express their opposition to the Aug. 31 framework and to reject the false universal suffrage.

During a press conference on March 4, former Chief Secretary for Administration Anson Chan said the Aug. 31 resolution had fundamentally destroyed the Hong Kong people’s universal suffrage for the election of the Chief Executive and the election of the 2020 Legislative Council.

She also strongly condemned the report submitted by Leung Chun-ying to the NPCSC, which aims to pave the way for the Aug. 31 resolution.

“Even worse, the government has promised to put forward different proposals during the second public consultation on Jan. 15 this year, to reform the Nominating Committee and the nomination process, and now eventually it all falls in vain.”

Yvonne Leung, former Standing Committee member of the Hong Kong Federation of Students, recently proposed a judicial review, saying that the role of the NPCSC should only be limited to confirming the electoral reform proposals submitted by the Hong Kong government, and there is no legal binding power in its three limitations.

During a radio interview she said that there is sufficient justification for the court interference, and the court has the responsibility to point out whether or not the Aug. 31 resolution has any legal, binding rights over Hong Kong.

Ching believes her suggestion is great. “It causes all Hong Kong people, and people around the world concerned about Hong Kong, to notice the flawed parts of the 8.31 resolution.”