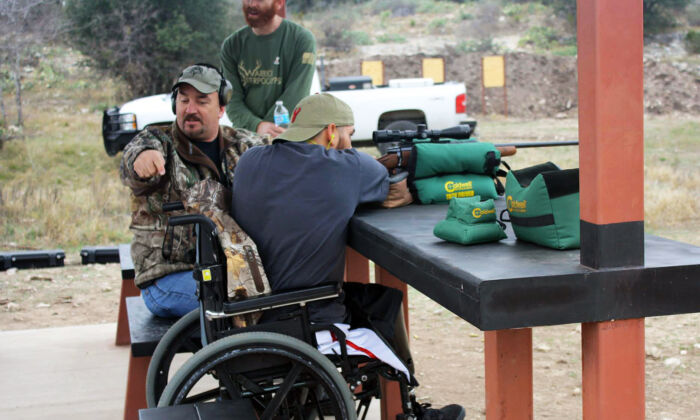 Retired U.S. Army veteran Jose Martinez (with rifle) lost both legs and his right arm when he stepped on a land mine in Afghanistan. His first trip with Lone Star Warriors was on a deer hunt in San Angelo, Texas, in 2014. “He wasn’t even sure he could shoot a rifle anymore, but he did it,” said Chris Gill founder of Lone Star Warriors Outdoors. “He was so grateful he could be with a bunch of guys who knew what he’d been through.” (Courtesy of Jose Martinez)
US News

Veterans Volunteer on Another Mission to Help Each Other

The seeds of his volunteering were sown at the foot of Hindu Kush mountains in Afghanistan, said Chris Gill, who served as a staff sergeant with the U.S. Army’s 95th Infantry Division.

A rocket attack in 2005 left Gill with injuries to his knees and shoulders, a painful reminder of his service at a forward operating base.

“It’s difficult to explain if you haven’t been there,” he said, “but the thought of dying is present in the background every day.

“My job in-country was to train Afghan soldiers in combat tactics,” Gill said. “It’s not nice what soldiers have to do. To say, ‘We’re going in and eliminate the targets,’ really means, ‘Kick in the door and kill everyone inside.’”

“Every time there is a mission outside the wire [off base], you are scanning to the right and left for people who are on a cellphone calling to arrange a trap ahead, or raising their hands in a window with maybe a rifle or a rocket.

“When you come home, you find yourself still doing that. That survival skill is hard to break. That’s one of the things people at home don’t understand and why vets need to talk to each other. They know.”

The subtext of life at a forward operating base is possible sudden death, he said.

“Even in your tent, you know a single rocket can end it all. If you let it get to you, you’re not going to sleep at night. You have to keep going.”

One day, a rocket did hit nearby and Gill became a statistic in the name of freedom. He’s rated at 100 percent disabled by the Department of Veterans Affairs (VA).

“The emotions, adrenaline, and heightened awareness of fighting in combat zones are foreign to most civilians,” he said. “Once you’ve been there, finding someone to talk to about it who knows what it felt like is hard.”

Gill started the nonprofit in 2011 so combat veterans with a VA post-traumatic stress disorder (PTSD) rating could have a place to meet others who knew what they had experienced.

“My goal was to get guys together to help one another through what they did and saw.

“To that end, we have several big events each year—hunting trips—specifically designed to get guys to bond with each other over a course of five days.”

“Ours is PTSD recovery and suicide prevention. I always tell the guys: ‘I hope you come home loaded with harvest, but the real goal is that every man comes home with the phone numbers of the guys he hunted with. And that you’d use that number at 2 in the morning when you need to.”

As on the military battlefield, the “war zone” at home can lead to depression or death.

“Most of the vets we work with, like Jose Martinez, are helped,” he said, “but there are some who can’t take it and don’t make it.

“Suicide after service is not unheard of. When that happens, it’s hard on all of us. But it’s a risk we are willing to take.”

Martinez lost both legs, his right arm, and most of his remaining fingers when he stepped on a land mine in Iraq.

“Jose didn’t know if he could fire a rifle again,” Gill said. “We helped him do that and he bonded with the guys. Success!”

Even now, Gill is an unpaid, full-time volunteer. His wife, Melissa, is a Mary Kay director. Gill has retired military pay from the U.S. Army to live on and a 401(k) from a civilian job.