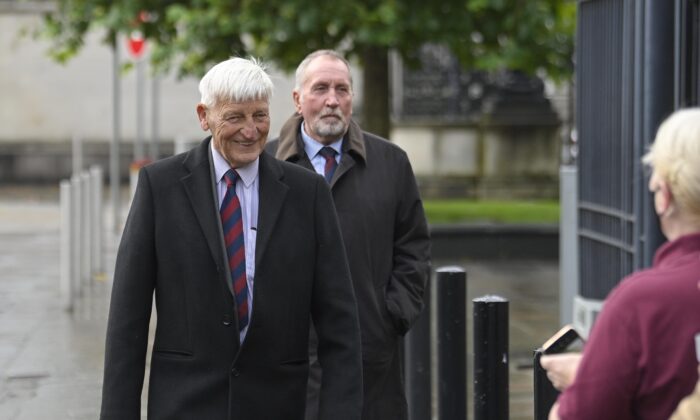 Dennis Hutchings arrives at Laganside Courts, Belfast, at the start of his trial, on Oct. 8, 2021. (Mark Marlow/PA)
UK

The trial of Army veteran Dennis Hutchings over a Troubles shooting has been adjourned for three weeks after the defendant contracted COVID-19.

Defence barrister James Lewis QC informed Belfast Crown Court of the development as proceedings in the non-jury trial were due to commence on Monday.

He told judge Justice O’Hara that Hutchings’s condition had been confirmed by a PCR test on Saturday.

“I regret Mr. Hutchings is not well with regard as one would expect with his other comorbidities of renal failure and cardiac malfunction. And we are unable to presently take instructions as he is currently in isolation in his hotel room.”

Lewis applied for an adjournment that was not opposed by the Crown barrister.

O’Hara said: “The optimism from last Monday about finishing the trial this week has faded away. We lost a bit of time on Wednesday, then we lost Friday entirely because of Mr. Hutchings’s cardiac problems. Things have obviously deteriorated over the weekend with his positive test for COVID. It is simply not possible to continue the trial in his absence.”

“I would like to be kept abreast of Mr. Hutchings’s recovery just to confirm we are on track for the target date of Nov. 8.”

Hutchings, 80, is suffering from kidney disease and the court has been sitting only three days a week to enable him to undergo dialysis treatment between hearings.

He is charged with the attempted murder of John Pat Cunningham in County Tyrone in 1974.

The former member of the Life Guards regiment from Cawsand in Cornwall also denies a count of attempted grievous bodily harm with intent.

Cunningham, 27, was shot dead as he ran away from an Army patrol across a field near Benburb.

People who knew him said he had the mental age of a child and was known to have a deep fear of soldiers.