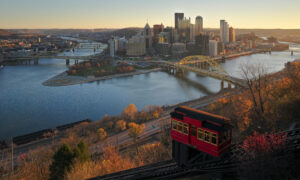 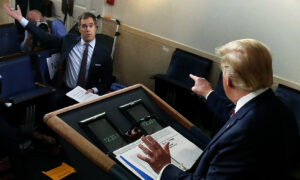 White House Press Continues to Humiliate Itself During Pandemic
0 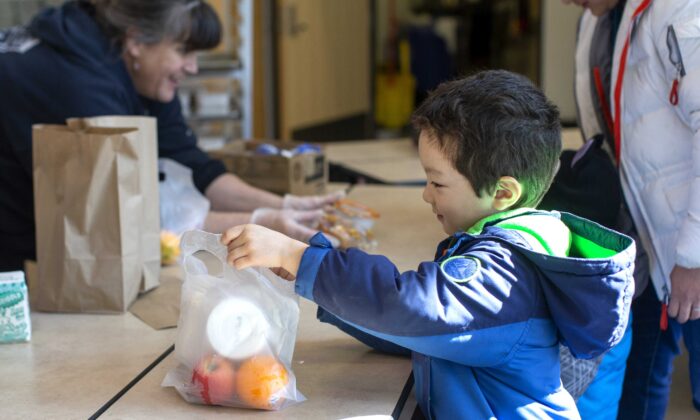 ALIQUIPPA, Pennsylvania—Retired Army Capt. Sean Parnell, a decorated war veteran who served in combat in Afghanistan, found himself doing what he always does when he feels the need to serve.

“My community is struggling right now,” he said. “It is sort of not in my nature to stand by and do nothing. One of the things I learned in the Army is that when you are a leader, you need to go where the contact is heaviest.”

Parnell, the Republican candidate for Congress running against Democratic Rep. Conor Lamb, said he decided to look around and see where the biggest need is in the communities surrounding him. “I saw that the Salvation Army had started to distribute bag lunches to schoolchildren in nearby Beaver County, so I checked with the CDC protocols on doing something like that, then called the local Salvation Army to see what they needed and how I could help provide it safely,” he said.

Last week, all schools in Pennsylvania were ordered to close to minimize spread of the new coronavirus, leaving a gap in service for children, and their parents or caregivers who depend on their school’s free lunch programs.

Parnell, the father of three, said he could not just stand by and not get involved. He used the Salvation Army’s list of food the children need and then went to grocery stores, stocked up on supplies and delivered food to volunteers staffing the lunch locations.

He paid for the food out of his own pocket.

“As public schools are closed, there are lots of kids that are lower-income kids that go to those schools and eat two meals a day there,” Parnell said. “And now kids don’t have school, and so it’s incumbent upon all of us at the local level to try to feed those kids and make sure that they have nutrition throughout this crisis.”

Other veterans across the county who are running for local, state and federal offices found their daily routines and schedules upended by the precautions put in place to halt the spread of the coronavirus.

In nearby O’Hara township, Marco Attisano, a Navy veteran and Democrat running for the state House, said he took himself and his entire campaign team to the local blood bank to donate much-needed blood.

Attisano, 35, said the campaign has suspended normal electioneering such as door-knocking and was searching for places in need. “I was looking for a way to serve in this moment,” he said.

Attisano rose to the occasion in part because of the local call to duty. Blood banks in the state were asking healthy donors to turn out in “full force” because of the donation shortage.

Patrick Murphy, the first Iraq War veteran elected to U.S. Congress, said: “These individuals don’t struggle with what the uncertainty brings to the campaigns. They struggle with their ‘mission first’ principles, a purpose-driven mindset that comes from a time spent in service to their country. They don’t think Republican or Democrat in that moment when they jump into service mode.”

Murphy, a Democrat, said that when he ran in 2006, he often took time to volunteer at the food bank and homeless shelters, and he even built a home for a veteran while balancing his campaign duties.

These veterans are all of the same generation, those who watched the Sept. 11 attacks and were ultimately moved to service in those moments—young people who heard the call of duty then and hear it now, as the country faces an unchartered and unprecedented health and economic crisis.

Lamb, a Mt. Lebanon Democrat who also served in the military, said in an emailed statement that since Saturday, he “has been following CDC guidelines while speaking regularly with constituents, local leaders, federal officials and members of the media—including the leadership of our local VA health care system, local business and union leaders, officials at our local hospitals and health care systems and at our regional food bank.” Lamb is particularly focused on “helping to address issues with testing availability, and he’s gathering input about what else Congress needs to include in the next phase of coronavirus response legislation.”

Parnell said he has pivoted his entire campaign operation and grassroots volunteer operation to focus on however they can best safely serve those in need. He said they will continue to give daily to the Salvation Army. “Our intent is just to be there for the community when they need it most,” he said.

In Grand Rapids, Michigan, Peter Meijer is an Army veteran and candidate for the Republican nomination in the 3rd Congressional District, currently represented by Rep. Justin Amash. Meijer said he switched the focus of his campaign this week and will now spend his time “accumulating and delivering care packages to the vulnerable people” in his community.

Now is not the time to focus on politics, he says: “In times of crisis, we focus on how we can best serve the community.”