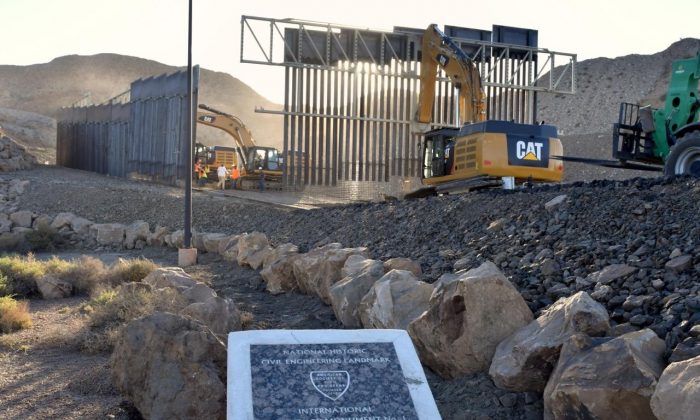 An Air Force veteran who lost three limbs in the Iraq War has built a wall on a short section of the U.S.-Mexico border, delivering on a promise to hundreds of thousands of donors.

Brian Kolfage raised more than $22 million and plans to build the wall mile-by-mile in strategic locations, getting permits from local private landowners.

Construction work started May 17 in the El Paso, Texas, metropolitan area, where an influx of illegal immigrants has drastically escalated in recent months—more than 600 percent in the Border Patrol’s El Paso sector in the first seven months of fiscal 2019, compared with the same period the year before.

The wall has a similar design to that used by the Trump administration, made of steel bollards buried several feet deep in the ground and standing 20 to 25 feet above ground. The first section is about a half-mile long and cost less than $10 million. That appears to be comparable to what the government has generally been paying for its wall construction. Kolfage said, however, that the price spiked due to difficult terrain and ended up less than what the government would have paid. He expects that on flat terrain his nonprofit could build for under $4 million a mile, well below the government’s average cost of about $20 million a mile.

“We can’t release full costs yet because of ongoing contracts we are in bid process with,” his press team said, via a text message.

The wall includes all the perks of the one built by the government, such as lighting, sensors, and access roads for the Border Patrol, the team said.

“Today is the big day!” Kolfage said in a May 26 tweet. “Today is the day the haters, the liberal media, and every doubter, chokes on their words. Check back later.”

Today is the big day! Today is the day the haters, the liberal media, and every doubter, chokes on their words. Check back later.

The next day, he posted a promotional video showing heavy machinery installing sections of the wall.

“This is like our Superbowl. This is our time to shine. To show the donors, first and foremost, that we can be trusted, that we can get the job done,” he told The Epoch Times in a phone call.

He said about three more miles of the wall are slated for construction and should be paid for from the existing funding. His plan is to sell the wall to the government for $1, which would make the government responsible for its maintenance. The technology, such as surveillance cameras and seismic sensors (to detect tunneling under the wall), are compatible with and ready to be hooked into the Border Patrol systems, he said.

He’s also trying to negotiate with the government access to the Roosevelt Reservation (pdf), a 60-foot strip of land along the border in New Mexico, Arizona, and California under federal control. That could give the nonprofit hundreds of more miles to build on, if private funding allows, since large stretches of that border are now only covered by the anti-vehicle fencing, which is only about 5 feet tall and easy to climb over for pedestrians.

Since he started his GoFundMe campaign, some media put Kolfage’s project, and even his integrity, in doubt. Rumors spread online about his misusing the donated funds, which have reached $22 million, although there’s no evidence he has.

A rumor that Kolfage may have bought a yacht with the donated money was spread by Grant Stern, a writer for Occupy Democrats, a left-wing progressive group, based on a single anonymous source. Kolfage said he bought the yacht months before the fundraiser started with money from selling his older boat.

Kolfage initially launched the GoFundMe campaign with a goal of crowdfunding $1 billion and donating it to the federal government for wall construction, saying he’d refund the donations if the goal wasn’t reached or almost reached. After raising some $20 million in 20 days, he indeed started to refund donations, but gave the donors an option to tell GoFundMe not to refund, in which case he would repurpose the donations for a wall built privately. About $6 million was refunded, but a single $6 million donation made up the difference, Snopes reported.

Setting up a nonprofit, We Build the Wall, the project established a website to solicit further donations.

The project has overcome some delays and has held back on some information, such as where it intends to build.

“We can’t go public with the information exactly because there are groups—different liberal groups—that do want to attack it and want to do everything to stop it,” Kolfage said at one of the project’s town halls.

Since the news broke that the nonprofit is following through on its promise, thousands of donations have streamed in, the GoFundMe page indicates.

Kolfage was severely injured in combat on Sept. 11, 2004, losing both legs and his right arm when an enemy rocket hit the Balad Air Base north of Baghdad.

After retiring from the military, Kolfage founded a coffee company, called Military Grade Coffee. In 2018, he took over from conservative columnist and author John Hawkins the management of the Right Wing News (RWN) Facebook page, which was followed by more than 3 million people.

A cursory review of the site showed headlines in sensational tone and articles written as a mix of news and commentary.

On Oct. 11, 2018, all three Kolfage’s pages were shut down, including the one for his coffee business, with its more than 200,000 fans. Facebook said the sites were purged for breaking rules against “spam and coordinated inauthentic behavior.” Kolfage said that nothing of this applied to his business. He believed he was targeted for political reasons.

Kolfage acknowledged to NBC News that he was handling administration and finances for the now-defunct FreedomDaily website, which was known for inaccurate, sensational reporting.

Update: The article has been updated with further information from Brian Kolfage, his press team, and his “We The People Will Build the Wall” GoFundMe page. Information has also been added about the U.S.-Mexico border and the barriers along it.