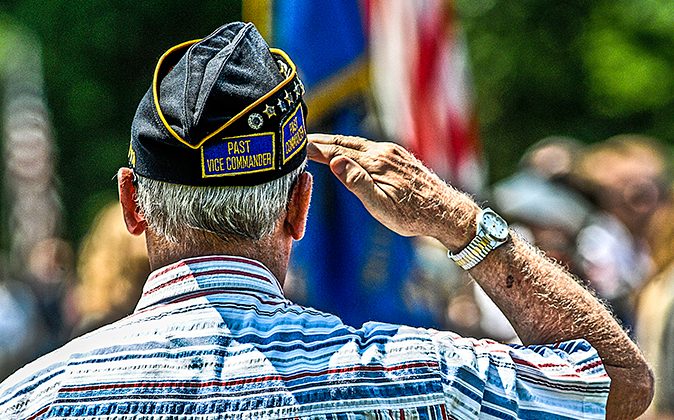 Jim Fullem, who was drafted into the Army in 1961, during the annual Memorial Day ceremony at Quantico National Cemetery in Virgina on May 28, 2012. (Lance Cpl. Emmanuel Ramos/U.S. Marine Corps)
US

Veterans on Sacrifice and Love of Country

On a regular basis, men, who are often in their 90s, will wake up at four or five in the morning, tired but expectant, to go on a one-day Honor Flight to visit the World War II and Korean War memorials in Washington, D.C.

Larry Shaver, a Vietnam veteran, said that when they return, “You see this gleam in their eye, you see this rejuvenation, and you can look in their souls in their eyes and see the patriotism—why these men and women went into the wars in the first place.”

It’s that same gleam, Shaver said, that men have in battle when they are scared to death, but realize things are not about them anymore. They realize what matters is “keeping my buddy beside me alive, and keeping that flag that flies above me on the beach and not letting it fall, because once it falls we’ve lost everything.”

Most veterans have had life-changing experiences that make them feel separated from others when they first return from war. Most have witnessed the horrors of war. Many have lost friends. Some return wounded physically, and some have wounds on the inside, to their souls, that make daily life a constant struggle. And some—especially those who fought in Vietnam—returned home only to be spat on and criticized. But despite all the terrible realities that war brings, Shaver and many other veterans look back and are glad for their service.

“Patriotism to me probably isn’t the flag-waving guy that wants to stand in front of people and cross his heart and wear a military hat,” said Waddie Mitchell, a Vietnam veteran who also spent 26 years working professionally as a cowboy.

To me patriotism is a guy that gets it done when it needs to be done, and isn’t afraid to back off and say, ‘Hey, we’re wrong on this one.’
— Waddie Mitchell, Vietnam veteran

Mitchell said patriotism isn’t about blindly saying everything our leaders do is great and wonderful. To him, “Patriotism is trying to keep your country and your home as good and right as it can be.”

“To me patriotism is a guy that gets it done when it needs to be done, and isn’t afraid to back off and say, ‘Hey, we’re wrong on this one,'” he said.

And that basic right, to not always agree with your government, to be able to choose what you believe and what you agree with—and to be able to step back when you disagree—is part of this freedom that people often speak about, and that many governments in today’s world won’t allow.

Mitchell views it as something “interchangeable with responsibility” for wanting what’s best for your country and your home. And so enjoying freedom requires undertaking service, taking responsibility for the good the nation affords.

Shaver, who is president of American Veterans Helping Veterans (AVHV) and a junior vice commander of the Veterans of Foreign Wars, said part of that sense of responsibility came about after he returned from Vietnam.

Shaver saw a darker side of one of America’s darkest wars. He was a “tunnel rat” who had to crawl through tunnels with a flashlight and a pistol looking for Vietcong, and despite that toil, when he returned home from service, he was greeted by a thankless country.

There’s positive and there’s negative, and if you carry the negativity your whole life, you end up shortening your life and you gain nothing.
— Larry Shaver, Vietnam veteran and president, American Veterans Helping Veterans

He said the sour taste of coming back like that from a war “washes itself out over the years” and men tend to go one of two ways. He found “There’s positive and there’s negative, and if you carry the negativity your whole life, you end up shortening your life and you gain nothing.”

“The better of us Vietnam veterans, we found a cause and we excelled in it,” he said.

For Shaver, that cause “was making sure that what happens to us doesn’t happen to the young men and women who, like us, sacrificed our lives to keep this country great.” He formed the AVHV, a nonprofit, to see this through.

Through his organization, he works with U.S. veterans from all wars, but said the bulk of his work is helping young families that have fallen into trouble. It’s common, he said, for service members in the Army National Guard, who keep their civilian careers and deploy to battlefields on a part-time basis, to run into hard times.

“A lot of them were going, four, five, six years, and they were coming back to no jobs and their family situations have deteriorated,” Shaver said. “We’ve had a lot of homeless veterans from that, and a lot of homeless families.”

In Vietnam, the National Guard was seen as the service to join if you wanted to avoid combat, he said, but the recent wars used volunteers instead of people chosen through a draft, and “so they tapped the National Guard across the country, militarized them across the government, made them regular duty Army, as far as that goes, then deployed them.”

After members of the National Guard returned home, many were “just kind of forgotten” and left without veterans benefits or proper care “like the rest of us,” Shaver said.

Service ties into a deeper principle of self-sacrifice.

Making sure that veterans can get the benefits and care they need has likewise been a focus of Shaver’s work with the Veterans of Foreign Wars. He noted, “We’ve gained a lot of inroads into solving these problems over the last 8 to 10 years.”

Despite all these difficulties, however, Shaver shared a common sentiment that he doesn’t regret his service. He said it ties into a deeper principle of self-sacrifice, and that a person should do what he or she believes is right.

He said the Fourth of July always brings to mind the famous painting of George Washington crossing the Delaware during the Revolutionary War, and his own knowledge from history of the hardships America’s forefathers endured at Valley Forge.

The United States was founded on a history of people “who really gave when they didn’t have to,” Shaver said.

He said it was founded by men who “could have continued to live prosperous, satisfying lives with their families,” and instead chose to risk all they had on a “great mission of making this country a free country, and giving people the freedom they came here for.”

Among the biggest problems in the country today, he believes, is that many people are just focused on personal interest. “Sometimes we forget there are other things we need to take care of to sustain that.” Shaver said. “It’s not always getting the best job or situation … there’s more to it.”

All we knew was that it was our job, it was for our country and our way of life, and at that point that’s all that mattered to us.
— Larry Shaver, Vietnam veteran, President of American Veterans Helping Veterans

For him, patriotism goes hand-in-hand with the idea of self-sacrifice, and a willingness to set aside self-interest for a greater good.

Back in 1965, Shaver said, he stepped off a landing craft at the start of his tour in Vietnam, and he often thinks of the 19- and 20-year-olds today stepping off helicopters and airplanes in more recent wars. He said, “They’re stepping off that plane, not because they have to, but because they have that patriotism in their chest that says this isn’t what I’d like to do, but it’s the right thing to do.”

“All we knew was that it was our job, it was for our country and our way of life, and at that point that’s all that mattered to us,” he said. He noted that while many Vietnam veterans, in particular, are sorry for what happened and sorry about losing their friends, “Those of us who went and done it will never be sorry for our service.”

According to Mr. Kane, an Army veteran who served in Iraq and Afghanistan, it has been the case in history that statesmen make the wars, but it’s “the soldiers under them who make the sacrifice.”

Kane requested to have his first name withheld, due to security concerns. He said in the United States today, “If you say you’re ex military you get discriminated against,” and veterans are sometimes greeted with knee-jerk reactions to the politics of war or from people who think veterans all have psychological problems.

“It’s cool to be anti-patriotic these days,” Kane said, but noted he joined the Army because he felt he owed it to his country. “I have all these benefits. I live in the land of milk and honey, and I wanted to give back.”

In the military, he was able to see the world, and saw firsthand that the comforts many Americans take for granted can be a rarity in the broader world. “These countries are so different from America, that it just reminded me this is where I want to be. This is my home,” he said. “Warts and all, I love my country.”

Norman Zuckerman, a 91-year-old veteran of World War II and a former prisoner-of-war under the Nazis, said the Fourth of July is a time that simply “reminds me that I’m in a country that’s free” and that we shouldn’t take what we have for granted.

He said when he and many others enlisted to fight in World War II, the thinking was often simple and straightforward. “It’s hard to explain feelings,” he said. “You wanted to do your share, and the only way we knew how was to enlist.”