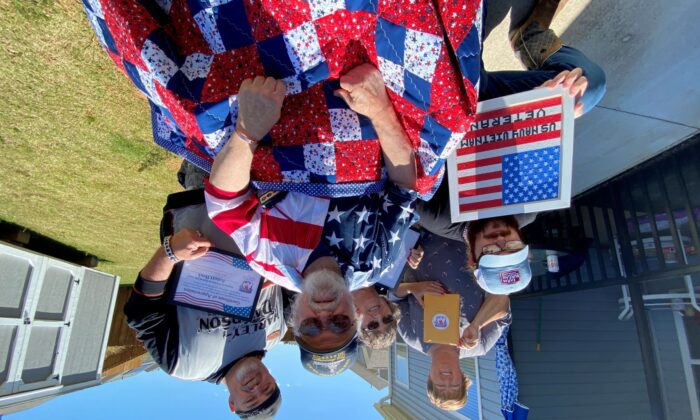 Navy veteran Robert Houk with his family at the Veteran’s Last Patrol honor ceremony. Houk served on the USS New Jersey during the late '60s off the coast of Vietnam. (Courtesy of Veteran's Last Patrol)
Life & Tradition

Veteran’s Last Patrol, a nonprofit organization headquartered in Spartanburg, South Carolina, is on a mission to connect veteran volunteers with veterans who are in hospice care.

When friendships matter the most, a volunteer from Veteran’s Last Patrol can make all the difference for a veteran who may be alone during end-of-life care. While some enjoy the closeness of family and friends, others have lost connection with loved ones and the military community.

Robert Houk served in the U.S.Navy on the battleship USS New Jersey during the late ’60s off the coast of Vietnam.  In hospice care, his mobility is limited and days are spent in a wheelchair.

“Can I get out on the river one more time to fish?” he asked a volunteer with Veteran’s Last Patrol. His wish to catch one more trout was granted with help from Davidson River Outfitters in North Carolina this past summer. Once again on the river (in a chair), he was able to breathe the fresh air, enjoy the serenity of a summer’s day, the gentle flow of the river, and smile while holding a freshly caught trout.

The stories of veterans in hospice care are touching and a stark reminder of who better to be served than those who so valiantly served us.

Serving in the military is an exceptional experience. Bonds are formed. While the decades may have passed, often rekindling that time of connectedness with one who has experienced similar memories is comforting as the veteran approaches his or her final days. Some stories are more easily shared veteran to veteran.

The Man Behind the Mission

Retired Army Col. Claude Schmid is at the helm of Veteran’s Last Patrol. Schmid retired in 2013 after 31 years of military service in combat units around the world.

“As a young boy, when I was around the table with my brothers, my mother would tell us of her volunteer work with a local hospice, about the decline and adversity faced with end-of-life issues,” Schmid said.

His mother’s experiences made an impression on him.

As wounded soldiers were returning to the United States, it was Schmid’s job, as a representative of senior military leadership, to greet them (usually on planes) as they returned to the United States from Iraq or Afghanistan. Depending on the extremity of their injuries, family members would often be with them, having first flown to Germany.

It wasn’t an easy assignment. Schmid would thank them for their service, offer sympathy and any assistance he could, and ensure that they were properly looked after during their transfer to a medical facility.

“They needed companionship and to share their stories,” Schmid said.

His mother’s stories of hospice care, his own military experience, and supporting wounded warriors got his wheels turning.

“I started checking with various hospice facilities and found that they were often lacking when it came to volunteer help,” Schmid said.

To date, Veteran’s Last Patrol has served more than 1,000 veterans with some 200 volunteers, and the list is growing.

“We certainly partner with other veterans’ groups,” said Schmid, acknowledging that for the veterans that volunteer, “it’s not easy—you never really see the approach of death up close … and you develop a rapport.”

“It’s our way of serving other veterans but you have to be willing to deal with end-of-life issues,” said Schmid, adding that the organization is constantly trying to recruit volunteers.

Schmid mentioned a recent veteran he had connected with. “He’s 93, served in World War 11, Korea, and Vietnam.”

He also recalled the story of another veteran.

“Your sense of hearing stays longer. This veteran couldn’t see and couldn’t speak [so] the volunteer would read to him. He enjoyed listening to music so the volunteer would play music from his phone. He played “Onward Christian Soldiers” and the veteran started to sing along with the words. It was amazing.”

“You don’t have to be part of a local group or chapter. Many are individuals in different parts of the states,” he said.

“As we grow, we’ll increasingly help folks partner and set up chapters in their areas with other volunteers.”

Schmid went on to talk about the organization’s three core missions.

First and foremost is offering friendship and companionship to a veteran who is in hospice care. Once a relationship is established, volunteers will usually visit at least once a week.

Hosting honor ceremonies is another way to remember a veteran’s service.

“We try to hold a last honor ceremony while they are still alive,” which could include a certificate from Congress, handmade quilts, and other gifts. “It’s a way to say thank you one more time.”

As a young Army soldier, Roy Johnson served during World War II as part of the post-Japan Occupation forces. He was responsible for keeping the electricity going for U.S. forces communications. After serving in the military, he was a Winn-Dixie supervisor for 40-plus years and a huge Clemson fan.

“You help me remember those big events from a long time ago,” he said at an honor ceremony celebrating his military service.

Many veterans are alone. Offering emergency assistance is another way to help particularly if the veteran is handicapped.

While still in the military and spending a lot of time with wounded warriors, and leading up to the start of Veteran’s Last Patrol, Schmid reflected on their individual stories and journeys.

What are the motivations for serving when the consequences could be so dire? He came up with what he refers to as the H-E-A-R-T factor based on the answers he was given.

The “E” and “A” stand for the excitement and adventure factors that motivate many young men and women to join the service.

“One was in better shape than the other. They were getting off the plane and I encouraged the one to go and get something to eat, that he must be tired from the long flight,” said Schmid.

“He told me that he didn’t want to go, that until his buddy was ready to go that he wasn’t going.”

Rapport. That was Schmid’s R.

Schmid related a story about another soldier.

“I went into this aircraft. There were four or five family members watching their son who was in a very sophisticated medical bed. He was severely injured. The husband was trying to console his mother. I was talking with them and asked why he had decided to serve,” remembered Schmid, noting that they appeared to be from a small town somewhere in America.

“They all served,” said the soldier’s wife proudly, and she told Schmid of the multiple generations in their family who had served in the military.

Tradition. The T in HEART.

From his mother’s example to his time spent with wounded warriors, Schmid has found a way to honor vulnerable veterans as they spend their last days in hospice care.

“We’re part of a team,” Schmid said. “Whether they patrolled the air, sea, or land, this is their final chapter, and this is one final way for us to serve.”

“We’re obligated all the way through their last patrol. We must stand by them.”

If you know of a veteran in hospice care who could use friendship and support, or if you would like to learn more about Veteran’s Last Patrol and how you can make a difference, go to their website at VeteranLastPatrol.org or call 864-580-8005. You can reach Claude Schmid at cschmid@veteranlastpatrol.org.

Last year, Veteran’s Last Patrol received and delivered 30,000 holiday cards to veterans in hospice around the country. Americans across the nation participated in this amazing operation to bring a little joy to veterans on their Last Patrol.

Donations are appreciated to help defray the costs of packaging and postage and can be made online at VeteranLastPatrol.org or mailed by check.

For more information, see their website at VeteranLastPatrol.org or call 864-580-8005.