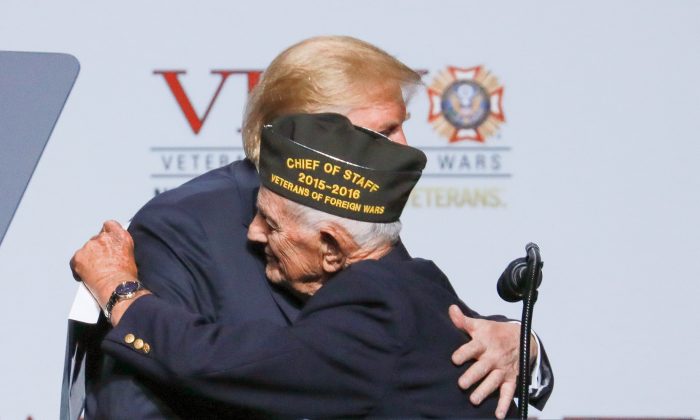 Despite the disproportionately high amount of grey hair, a crowd of veterans and their families was lively and vocal as they welcomed the president to the Veterans of Foreign Wars (VFW) conference in Kansas City on July 24. The VFW is the oldest service organization for veterans, founded in 1899.

“My thinking is always on military and military strength,” Trump said. “That is why I’m proud to report that we are now undertaking the greatest rebuilding of our United States military in its history.”

“America is a peace-loving nation. We do not seek conflict. But if conflict is forced upon us, we will defend ourselves. And if we must, we will fight and we will do nothing but win,” Trump said.

The president said the new Defense budget allows for 30,000 more new soldiers, sailors, airmen, and Marines. “And I’ve directed the Pentagon to begin the process of creating the sixth branch of our military. It’s called the Space Force,” he said.

“To every single member of the VFW, because of your service, your courage, and your example, we are restoring the dreams and the glory, and the greatness of America.

“I had four brothers serve in World War II,” Jones said. “My oldest brother was lost off the coast of Italy. Many times, I just wish that he could come back to the land of the free and the home of brave again.”

Amid much cheering, Jones asked the president if he could visit the Oval Office on his 95th birthday in April next year.

“We pay tribute not only to Allen, but to all of the heroes of the Greatest Generation,” the president said. “And I’d like to take this moment to recognize every World War II veteran in the audience today. Each of you is a national treasure. It’s true.”

Trump touted his impressive resume in backing veterans and their needs post-war.

On June 6, he signed the VA Mission Act of 2018, which means veterans can use doctors outside the VA for more timely treatment.

“That’s got to be the biggest improvement you can have,” Trump said. “Thousands and thousands of lives are going to be saved. And your quality of life is going to be so much better.”

The GI Bill has been expanded so that veterans can use their education benefits anytime; they no longer expire.

Last year, Trump signed the VA Accountability Act, which has helped rid Veterans Affairs of ineffective staff. From the beginning of the Trump administration through May 2018, the VA took “more than 3,200 accountability actions, which include removals, suspensions, and demotions,” according to the White House.

Veteran Joseph Bragg, who fought during the Vietnam era, said he flipped from Democrat to Republican to vote for Trump.

“Trump is my man, because he is for building up the military and not cutting it down, like all the other ones,” Bragg said. “He takes care of the veterans.”

Gonzales lives in San Antonio, Texas, and was a lifelong Democrat until Trump came along.

He said he is satisfied with what Trump is doing, for veterans and in general.

“He’s solid. He means what he says,” he said. “He’s listening and he delivers.”

John Griffith from Ann Arbor, Michigan, is a retired special agent with the Justice Department and a Vietnam veteran. He spent 32 years in law enforcement, including on Secret Service detail during the Clinton era.

Griffith said Trump is doing a fantastic job and has also noticed a marked positive difference in VA treatment since Trump took office.

Griffith added, “And if we can get the snowflakes and liberals out of the way, he could turn this country upside down and headed in the right direction.”

Griffith called the growing push for socialism “mind-boggling” and blames the education system for not teaching children about socialism, communism, and other forms of government.

“They have no concept that not everything can be free—somebody’s got to pay for it. And it’s not free when your neighbor is paying for it,” he said. “Socialism hasn’t worked in any country it’s ever been tried.”

Griffith said when he went off to fight in Vietnam, he was “an 18-year-old idealistic kid.”

“I thought I was fighting for Mom, apple pie, and the American Way. And it’s been a long road, but I still believe in America. … With President Trump, I have a lot of hope for this country.”