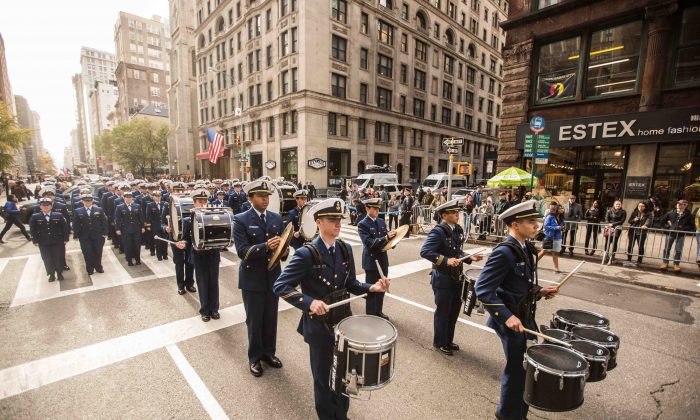 While honor is important, parade participants said it's equally important to recognize the challenges veterans face
By Janita Lum

NEW YORK—On Veterans Day, Americans are reminded of the courage it takes to lift one’s right hand and swear the oath to defend the nation.

It’s a day for Americans to come out to show respect to the hundreds of thousands of men and women who have served the country. It also helps raise awareness of the multitude of challenges experienced by veterans transitioning to civilian life.

Many of the problems faced by veterans have been slowly alleviated. The drop in veteran unemployment rates, for example, serves as a precedent to show how support from the community and Congress can play a key part in improving every aspect of veterans’ lives.

New York City Mayor Bill de Blasio said at the Veterans Day parade opening ceremony at Madison Square Park that it was crucial for Americans to recognize the challenges experienced by veterans.

Ray Mabus, United States secretary of the Navy, also stressed the importance of the partnership between civilians and the people who have served or are on active duty.

Basimah Hodges, an active member of the U.S. Army who was at the parade to support the veterans, said she’d like to see more direct appreciation from politicians.

“I feel very slighted that … I haven’t met Barack Obama, not one time,” Hodges said. “I feel like if you can put on political dinners that cost $5,000 and up, then I should be able to shake my president’s hand. He should shake hands with every soldier in this country, every last one of them.”

Parade spectator Robert Vaczy, a multimedia producer from New York, certainly appreciates the sacrifices made by the men and women who serve the country. He expressed that the Veterans Day parade should be the largest parade in the country.

“They are honoring our forefathers. They are an extension of our forefathers and it’s also important for the young generations to notice that there is a linage, a line, between the founding of the country and the things that have taken place to preserve it and maintain it,” said Vaczy.

Vaczy, 50, added that he was at the parade to honor his father’s service to the country. His father, a World War II veteran who served in Korea, was saddened by the fact that people are not as patriotic today.

“I think one of the biggest challenges my father faced was reconciling the fact that younger generations were not as fervently patriotic as his generation was,” said Vaczy.

“The funny thing was that their generation was the one that set the table for ours. I think he wishes that it was more important to most,” he added.

Returning in the ’70s

The 1970s were a difficult time for veterans returning to civilian life. The reception many received upon returning home was often belligerent.

Sean Hughes, a veteran of the Marine Corps supporting his wife in the parade, said in the ’70s vets didn’t receive as much support as they do now.

“People didn’t even talk to you. My wife and I had a hard time renting houses to live in. As soon as they saw we were military they would say they were full,” said Hughes who returned from service in 1986.

According to Vietnam veteran John Podlaski, author of “Cherries: a Vietnam War Novel,” media and entertainment at the time portrayed the veterans as unemotional killers with mental, drug, and alcohol abuse problems. This further added to the civilians’ hostility to the veterans, he said in a blog post on his website.

These veterans encountered numerous difficulties when transitioning from military to civilian life, particularly in finding jobs. The unemployment rate for male veterans (between 20 to 34) in 1975 was 9.3 percent, which was a jump from 5.3 percent in the previous year, according to the Bureau of Labor Statistics (BLS).

These challenges have not dissipated, however, the employment situation for veterans has improved substantially since 1975. This is mainly due to greater veteran recognition and increased awareness of challenges faced by ex-service members.

The unemployment rate for male veterans (over 18) in October 2015 was 3.7 percent, which is down from 4.3 percent during the same month last year, according to the BLS.

Increased recognition from the corporate community has contributed to the improvement of the overall employment situation for veterans.

In 2011, 11 firms came together with the goal of hiring 100,000 veterans by 2020. The coalition, Veteran Jobs Mission (previously known as 100,000 Jobs Mission), has expanded to involve companies from almost every industry.

They’ve already far exceeded their goal. Since its establishment, over 290,000 veterans have been hired through this effort.

Government support has also played a considerable role in assisting veterans to successfully return to civilian life. According to Iraq and Afghanistan Veterans of America (IAVA), a veteran empowerment organization, the Post-9-11 GI Bill is the largest investment in veteran education by the federal government since World War II.

The bill provides upfront tuition payments paid to the school, an annual book, and supplies stipend of $1,000, and a monthly housing allowance. The program has benefited over 1 million veterans and their families since Aug. 1, 2009.

Research by the Rand Corp. found that the program also motivated veterans to pursue higher education by allowing participants to attend school full-time without needing to work.

“This is one of the most important programs helping our Iraq and Afghanistan Veterans reach their educational goals,” former Secretary of Veteran Affairs Eric Shinseki said on the department’s website.

These programs have helped many veterans, but there’s still a ways to go.

In particular, there is a need for increased support services particularly in areas of physical and mental health, and homelessness—the biggest issues facing vets today.

Mayor de Blasio reminded New Yorkers of these issues and stressed the urgency to address them. He repeated President Obama’s admonishment, “Veteran homelessness, how could there even be a phrase veteran homeless?”

He added that New York was working every day to meet the president’s challenge to overcome homelessness for vets in New York City by the end of this year.