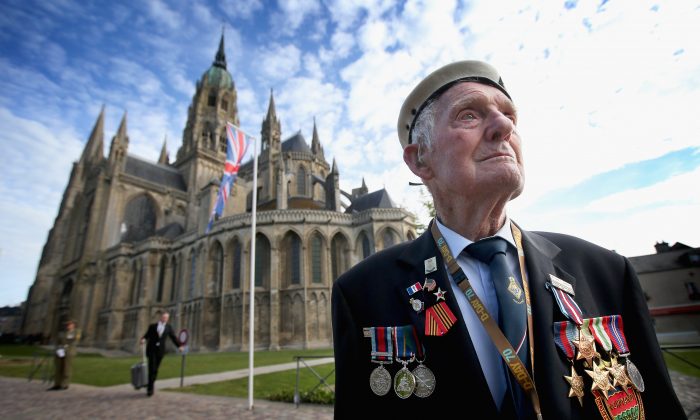 D-Day Veteran 88 year old Victor Walker, formerly of HMS Versatile, arrives at Bayeux Cathedral for a Service of Remembrance during D-Day 70 Commemorations on June 6, 2014 in Ranville, France. Today is the 70th anniversary of the D-Day landings which saw 156,000 troops from the allied countries including the United Kingdom and the United States join forces to launch an audacious attack on the beaches of Normandy, these assaults are credited with the eventual defeat of Nazi Germany. A series of events commemorating the 70th anniversary are taking place this week with many heads of state travelling to the famous beaches to pay their respects to those who lost their lives. (Chris Jackson-Pool/Getty Images)
US

Veterans Day, the next major holiday for Americans, will be next Tuesday on Nov. 11.

Some people will get Monday off, but Tuesday is definitely a federal holiday, meaning that many public services like schools, the DMV, the stock market, and post offices will get the day off.

Most national banks and some stores also observe the holiday.

Then-President Woodrow Wilson said at the time: “To us in America, the reflections of Armistice Day will be filled with solemn pride in the heroism of those who died in the country’s service and with gratitude for the victory, both because of the thing from which it has freed us and because of the opportunity it has given America to show her sympathy with peace and justice in the councils of the nations.”

Later, the holiday was signed into law by former President Dwight D. Eisenhower in 1954.

PITTSBURGH (AP) — Organizers are moving Pittsburgh’s Veterans’ Day Parade up to Saturday, Nov. 8, in hopes it will enable more veterans to participate and draw a bigger crowd.

The parade held on a Monday last year drew a small crowd and some veterans complained they couldn’t participate because they had to work.

Veterans’ Day is Nov. 11, a Tuesday, so organizers are going to move it to the preceding Saturday to see whether it helps the event.

Tony Filardi, an Air Force veteran who chairs the parade, says, “We are giving it a test and if it doesn’t seem to work out we may go back to the 11th.”