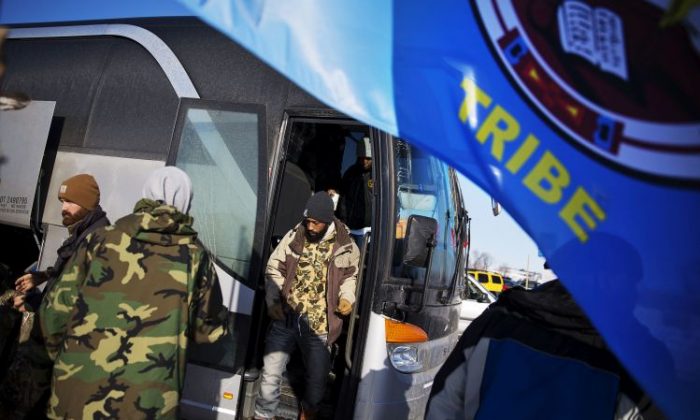 Veterans get off a bus from South Dakota after arriving at the Oceti Sakowin camp where people have gathered to protest the Dakota Access oil pipeline in Cannon Ball, N.D., Sunday, Dec. 4, 2016. Tribal elders have asked the military veterans joining the large Dakota Access pipeline protest encampment not to have confrontations with law enforcement officials, an organizer with Veterans Stand for Standing Rock said Sunday, adding the group is there to help out those who've dug in against the four-state, $3.8 billion project. (AP Photo/David Goldman)
US

Already, a few hundred of the group Veterans Stand for Standing Rock have arrived at the Oceti Sakowin, or Seven Council Fires, camp and the group’s GoFundMe.com page had raised more than $1 million of its $1.2 million goal by Sunday—money due to go toward food, transportation and supplies.

Navy veteran and Harvard graduate student Art Grayson came to the camp because he “couldn’t stand by and watch people being abused,” a reference to contentious and debated clashes between protesters and law enforcement.

“People are fighting for something, and I thought they could use my help,” said the 29-year-old from Cambridge, Massachusetts, who flew the first leg of the journey, then met up with other veterans and rode from Bismarck in the back of a pickup truck.


“For people to recognize we are here says a lot,” Grayson said, adding that though he has finals this week, he told professors “I’ll see you when I get back.”

The government has ordered people to leave the main encampment, which is on federal land in southern North Dakota, by Monday. But demonstrators say they’re prepared to stay, and federal, state and local authorities say they won’t forcibly remove the protesters.

North Dakota authorities have said they’ll move away from a key bridge near the by Sunday afternoon if demonstrators agree to certain conditions, which were outlined in a Morton County Sheriff’s Office news release.

“The question was asked if we would consider pulling back from the Backwater Bridge,” Cass County Sheriff Paul Laney said in the Saturday release after a conversation between law enforcement and the organizers with Veterans Stand for Standing Rock, “and the answer is yes! We want this to de-escalate.”


Authorities will move from the north end of the Backwater Bridge by 4 p.m. Sunday, they said, if protesters stay south of the bridge, and come to the bridge only if there is a prearranged meeting with law enforcement. Authorities also asked protesters not to remove barriers on the bridge, which they have said was damaged in the late October conflict that led to several people being hurt, including a serious arm injury.

Protesters also are not supposed to walk, ride or fly drones north of the bridge, Laney said.

The bridge blockade is something that Standing Rock Sioux tribal chairman Dave Archambault has been asking to be removed, the Bismarck Tribune reports , and something he said he would to talk to Gov. Jack Dalrymple about when they meet in person. A date for that meeting hasn’t been set.

The Standing Rock Sioux tribe and others say the pipeline north of the reservation could pollute drinking water and threatens sacred sites and want changes made to its route. The pipeline is largely complete except for a short segment that is planned to pass beneath a Mis