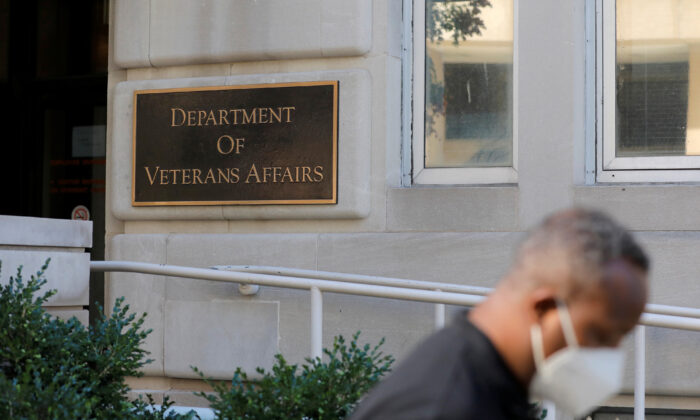 Signage is seen outside of the United States Department of Veterans Affairs in Washington, D.C. on Aug. 30, 2020. (Reuters/Andrew Kelly)
Southern California

SAN DIEGO—A U.S. Marine Corps veteran from Spring Valley was sentenced on Dec. 6 to eight months in custody for having falsely claimed he was disabled and defrauded the Department of Veterans Affairs (VA) out of more than $183,000 .

Anthony Medrano, 42, submitted fraudulent claims to the VA over the course of several years, in order to obtain caregiver benefits for his wife, according to the U.S. Attorney’s Office.

Medrano alleged he needed assistance with bathing and daily activities, claiming he could not stand for more than 10 minutes at a time.

The U.S. Attorney’s Office said Medrano learned how to bilk the system through his job as a veterans service representative in the VA’s Veterans Benefits Administration, which authorizes payments for disabled veterans who need “substantial caregiving” and financial assistance to pay for their care.

In his claims, Medrano stated he had been unemployed since 2012, though prosecutors allege he was employed by the VA from 2013 until February 2021.

He also claimed he could not lift more than 20 pounds, but according to the prosecution’s sentencing memorandum, Medrano posted videos of himself on Facebook doing pushups with a 25-pound weight on his back.

“This defendant used his position to game the system at the expense of those with legitimate claims and taxpayers in general,” said acting U.S. Attorney Randy Grossman. “It’s not only outrageous when an undeserving person claims a disability. It’s also a crime. And unfortunately for this defendant, he is going to jail.”

Earlier this year in San Diego federal court, Medrano pleaded guilty to one count of theft of government property.