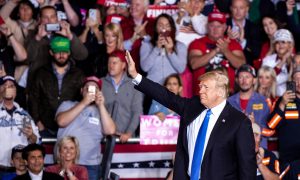 Veteran, Pastor Killed While Trying to Help Daughter Who Ran Out of Gas

A beloved pastor and military veteran was struck while trying to cross a freeway to help his daughter, who was on the side of the road after running out of gas.

Earl Gresham, 73, parked on the southbound side of I-65 north of Louisville, Kentucky on Jan. 25 and crossed over all the southbound lanes and the median barrier before being struck by a green 2007 Camry while crossing over the northbound lanes, according to the Indiana State Police.

Gresham died upon impact on the freeway, near the 12-mile marker.

Family members remembered him as a good person who was always helping others out.

“My husband was just a really good man,” Cynthia Gresham, 66, told the Louisville Courier-Journal. “He would help anybody. It didn’t matter what time they called, he would try to help them.”

Gresham served in the U.S. Army and was stationed in Alaska for several years in the ’60s; other than that, he lived his entire life in New Albany.

Gresham was a pastor who “didn’t take a penny for preaching,” Cynthia Gresham said. “He just did his oldest brother’s funeral last Monday.”

Gresham had a large family. He had 10 siblings growing up and he and Cynthia Gresham had three children and, eventually, seven grandchildren.

“He even picked up his grandkids every Sunday to take them to church and everything,” Cynthia Gresham said. “I just can’t get over it.”

Earl Gresham, 73, was founder and pastor of Faith and Love Church in New Albany. https://t.co/yI7h6bjThU via ⁦@courierjournal⁩

Terry Lynch, who lives next door to Faith and Love Church, where Gresham was a pastor, said that he was a kind-hearted gentleman.

“I am totally shocked. Just shocked. It’s just so hard to put into words,” Lynch told the News and Tribune.

“He was just a very special man. He deserves so much honor because he would do anything for anyone.”

She said Gresham was usually active, often outside tending to the grounds of the church. Whenever she or her husband saw him, he would smile and wave.

“When you see people like him all the time and always say, ‘Hi, how are you today?’ that’s such a nice relationship to have that you cherish,” she said. “He was always willing to offer a hand to help with whatever you need. He was such a good person. This is a tremendous loss.”

She said that the last thing he was doing showed who he was as a person: “He was doing what he loved to do—helping people.”

Police say 73-year-old Earl Gresham’s daughter ran out of gas on I-65 north near Sellersburg. https://t.co/mnvHLBmBFA

According to the Insurance Institute for Highway Safety, analyzing data from the Department of Transportation, there were 37,461 deaths from car accidents in 2016, the last year full data is available for. The deaths occurred across 34,439 fatal motor vehicle accidents.

The number means 11.6 deaths per 100,000 people and 1.16 deaths per 100 million miles traveled, although those numbers can vary widely across states.

“This is good news and bad news,” said Deborah Hersman, CEO of the National Safety Council, told CNBC. “The total number of fatalities is not getting worse, but the situation is not getting better.”

Hersman cited distracted driving and higher speed limits for the number. “There are a number of states that have raised speed limits, some now have stretches at 80 or 85 miles per hour,” she said.